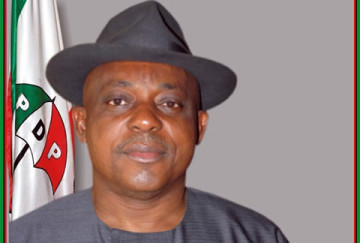 The Acting National Chairman of the Peoples Democratic Party, Prince Uche Secondus, on behalf of members of the party nationwide, condemned continued terror attacks, particularly the mindless killing of over 145 Nigerians in Borno state on Thursday.

The party, in a statement by its National Publicity Secretary, Olisa Metuh, on Friday, said it was extremely grieved by the killings, which cannot be justified under any guise, while calling on Nigerians to present a common front against insurgency.

“Indeed, the time has come for all Nigerians, irrespective of ethnic, religious and political affiliations to be in one accord in the fight against terrorism in our dear country.

“In this challenge, the PDP stands with President Muhammadu Buhari and the nation on any measure adopted by the Federal Government aimed at ending this in this ugly experience. We may not be on the same page on some policy issues but not when it comes to matters that directly affect the security of our citizens and our stability as a nation”, the PDP said.

While calling on the masterminds of the insurgency to embrace peace and end the mindless bloodletting, the opposition party commiserated with the government of Borno state, the families of those who lost their lives and prayed God to give them the fortitude to bear the loss.

It also called on all citizens to continue to support and pray for the security forces as they put their lives on the line in defense of the nation.

The post PDP Grieved By Borno Attacks, Stands With Buhari On Moves To End Insurgency appeared first on INFORMATION NIGERIA.

Nigeria Must Prove That Its Not Big For Nothing – Buhari