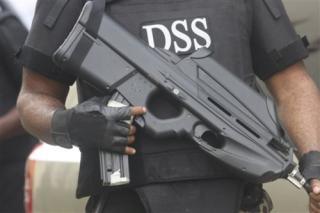 The Department of State Services says it has arrested 28 suspected kidnappers nationwide within six days.

According to the security agency, the suspects were apprehended across various states in the South-South, South-West and the North-West regions between July 20 and 26, 2015.

A statement by one Tony Opuiyo on behalf of the DSS on Saturday in Abuja, said the service in line with its statutory mandate, initiated series of special tactical operations in states prone to the nefarious activities of criminal gangs.

The operations, it added, succeeded in the capture of the masterminds and other facilitators of kidnapping syndicates among whom is one Victor Afikparobo, who was picked up on July 20, 2015 at Owheologbo, Isoko North LGA of Delta State.

The service further claimed to have arrested three suspects, including one John Felix (a.k.a. Austin), Rowson Anufa (a.k.a. Amori) and Obukoko Emoabe, a local herbalist to the group on July 22 at Ovara Orugun village in Ughelli North LGA, Delta State.

The trio are key members of the kidnap syndicate that terrorised the Lagos-Ikorodu road, and Owo, Ondo State, the DSS stated.

On July, 24, the DSS also apprehended Joseph Ojobor (a.k.a Chairman), the leader of the Lagos cell of the ‘Federal’ kidnap syndicate at Uduere, village in Ughelli North LGA, Delta State.

READ  Buratai Is Winning The Battle Against Terrorism - AU

The DSS said he had also been linked to some incidents of illegal bunkering and pipeline vandalism.

Also, on the same July 24, at about 0500 hours, the DSS team arrested another member of the Lagos cell of the ‘Federal’ kidnap syndicate, one Timothy Japheth in his house at Onokpasa Avenue in Okhan village in Ughelli North LGA, Delta State.

“Earlier, on July 19, another member of the notorious gang, one Howell Anufa, was apprehended by the service. The suspect was instrumental to the kidnap of the Regent of Akungba Akoko in Ondo State.

“Anufa also participated in the spate of kidnap incidents, carried out by the gang in Lagos and Ogun states respectively, before he relocated to Warri, Delta State, where he was eventually arrested”.

Also in the net is one Akeem Bello, a lance-corporal who deserted his unit in the Nigerian Army when he was deployed in Maiduguri, only to join vampire’s kidnap gang.

“Between 19– 20th July, 2015, at varied locations in Danko-Wasagu LGA of Kebbi State, the Service apprehended four (4) suspected kidnappers of one Maryam Mohammed Rabiu, the daughter of Mohammed Rabiu who was abducted on 13th July 2015.

“The gang has been identified as the syndicate which perpetrated the recent kidnap of Abbas Mohammed Jega, the driver of the brother of Attahiru Jega (Prof), former Chairman of INEC.

“The gang in its bid to evade detection, used one of the three (3) mobile phones stolen earlier from Maryam Rabiu, to establish contact with the family, in which they demanded a ransom of Twenty Million Naira (N20m).

“These elements are Umar Gide (Dudu), Ibrahim Mugu and Baban Garna Dudu was found to be involved in the kidnap of the daughter of former Council Chairman of Danko-Wasaju LGA and the mother of the Post-Master General of the Federation, among several others.

“Another member of the gang, Mohammed Sani, a.k.a Sani Maja, was arrested by the Service in Zamfara State”, the statement added.

The DSS said the operations were still ongoing to arrest fleeing members of some of the identified kidnap gangs and others hiding at various areas across the federation.

The service added that judicial processes were being perfected to arraign the suspects in court.

We Have To Defend Better – Klopp

My Daughter Is More Beautiful Than Me – Iyabo Ojo