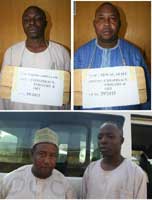 The Economic and Financial Crimes Commission, EFCC, on Wednesday, August 12, 2015, arraigned the duo of Yazidu Abdullahi and Auwal Tahir Aliyu before Justice Rabi T. Umar of Bauchi State High Court on a five-count charge bordering on  conspiracy, forgery and obtaining money by false pretence to the tune of N 780,000.00k( Seven Hundred and Eighty Thousand  Naira).

The suspects, who are members of a syndicate, allegedly perpetrated the fraud using a forged document, Right of Occupancy on a property with title No (BA/28150) situated at Fadaman Mada, Bauchi State.
The suspects allegedly used the forged documents to sell the uncompleted building on the plot of land to Garkuwa who eventually discovered that the said land belongs to one Abubakar.

Count five of the charge reads:  ‘‘That you Auwal Tahir Aliyu  (M), Yazidu Abdullahi (M), Haruna Abdulmumin (M) (now at large) and Sadiq Shehu (M) (now at large) sometime in the month of June, 2015 or thereabout in Bauchi State, which is within the jurisdiction of this Honourable Court ,with the intent to defraud, committed an illegal act to wit: Giving as genuine a forged certificate of grant of Right of Occupancy No: BA/28150 purportedly issued to one Alhaji Idris Tela Saleh which you knew to be forged to Alhaji Inuwa Garkuwa as proof of title to land you fraudulently sold to him located at Fadaman Mada Bauchi and thereby committed an offence contrary to Section 366 and punishable under Section 364 of the Penal Code Law, Laws of Northern Nigeria.’’

The suspects, however, pleaded not guilty when the charges were read to them.
Following their plea, prosecution counsel, Nnaemeka Omewa, prayed the court for a trial date.

Justice Umar ordered the suspects to be remanded in prison custody and adjourned hearing on the matter to August 20, 2015.

I Will Rotate Giroud And Morata – Sarri