Barcelona duo of Lionel Messi and Luis Suarez will contend with Real Madrid’s Cristiano Ronaldo for the 2014-15 Best Player in Europe Award, UEFA has announced.

Journalists from each of UEFA’s 54 member nations provided a list of their five best-ranked players, with the first receiving five points; the second four, third; three, and so on in that order.

The ten players with most points advanced to the second vote, where from the aforementioned three candidates in the final shortlist have emerged.

The winner will be determined by votes during the 2015-16 Champions League group stage draw in Monaco on 27 August.

Messi scored 58 goals in all competitions as Barcelona completed their second treble-winning campaign in as many seasons – including a brace in the final of the Copa Del Rey against Athletic Bilbao. 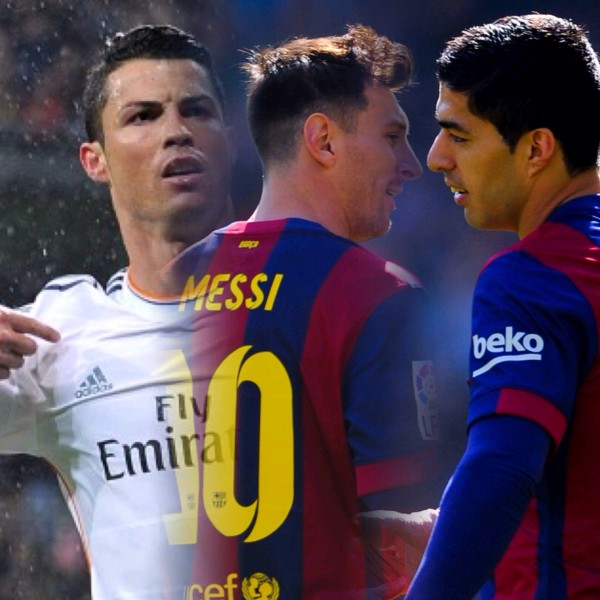 His brace in last night’s Super Cup took his tally in Uefa Club competitions to 80; same as Portuguese Ronaldo, who is tied with the Argentina skipper on 77 goals in Europe’s premier club football competition, the Champions League.

Ronaldo led the Spanish Primeira Division goal scorers’ chart last season with 48 strikes. He was joint top scorer with Messi, Neymar in the 2014-15 Champions League season with 10 goals as Real failed to move beyond the semi-finals.

He finished the 2014-15 season with three successive hat-tricks against Getafe, Espanyol and Armenia.

Following his €81m transfer to Barca and after missing the first part of the season as punishment for biting Giorgio Chiellini at the 2014 Fifa World Cup in Brazil, Uruguayan striker Suarez finally made his debut for the Baulgranas in the El Clasico away to Real on 25 October.

He hit target twice on his first return to England as Barca beat Manchester City 2-1 at the Etihad Stadium to set the tone for a 3-1 aggregate win in the last-16 of the Champions League.

Suarez, whose first Barcelona goal came in a 4-0 win at APOEL in the Champions League group stages, formed a formidable partnership with Messi, and Neymar – the trio accounting for 122 of their club’s goals in that season.

Suarez on his own produced 25 goals and 20 assists in all competitions in his first season.

Clense Your Hearts During Ramadan – Ambode

APC Did Not Learn From Their Victory – Bukola Saraki