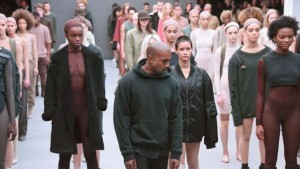 American rapper, Kanye West, has reportedly banned everyone involved in his show at New York Fashion Week from discussing him, his wife Kim Kardashian West, 34, and his daughter North, two, or risk being slapped with a £6.5 million fine after they put pen to paper and signed his non-disclosure forms.

A reliable source told the Daily Mirror newspaper: ”Kanye’s hacked off some really high-profile models by asking them to sign the agreement, particularly because it stated that he could sue them for up to $10million if they spoke out about him.”

The source added: ‘‘It’s a ridiculous amount and some models flat out refused. He’s not considered a great talent – everyone knows his show is just a media frenzy, so some girls would rather not be associated with him.”

Tunde Oloyede Was A Man Who Enjoyed Helping Others – Olu...