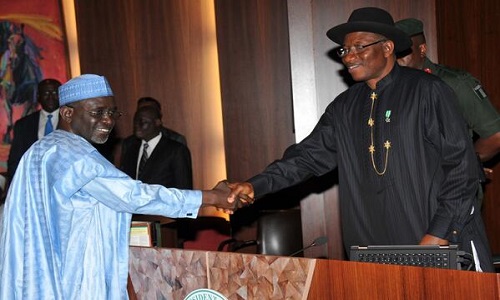 Shekarau, who stated this on Wednesday in a chat with journalists at the Abuja National Stadium, insisted that all the ministers who served under the administration of former President Jonathan are still with him.

He denied reports in some quarters that Jonathan has been abandoned by his former aides, pointing out that not all meetings with the ex-president by his former ministers are reported.

“No, you see, all of us who worked with Jonathan are still intact with him. We are still with Jonathan we cannot abandon him because, as our leader, he has played his part in the development of the country. We don’t need to publicize our meetings with him in our private capacity”, he said.

The former governor, who expressed optimism that the Peoples Democratic Party (PDP) will bounce back in 2019, said what happened in the last general elections was good for the party to recoup and plan for the great challenge ahead.

“We have done our beats and we have taken a retreat to plan ahead, and prepare for the next competition in which Nigerians will judge.

“PDP will bounce back, it is like a force b*tton which has given us the opportunity to reorganise for future elections and get back our mandate.

“What is happening is a good development for democracy in the country like in advanced world where you have two strong parties competing for space, and the electorate are always there to judge when it comes to election time. I am confident PDP will definitely weather the storm and take its rightful position”, he said.

Ronaldo Is Not The Only Threat – Pellegrini