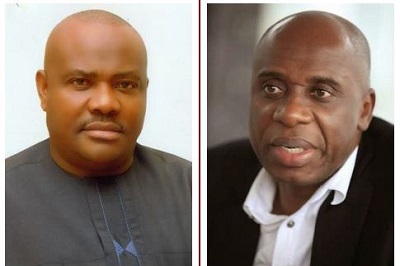 The All Progressives Congress (APC) in Rivers State has accused Governor Nyesom Wike of leading a gang-up to sabotage his predecessor – Rotimi Amaechi’ s chances of being appointed into the cabinet of President Muhammadu Buhari.

In a statement issued on Tuesday in Port Harcourt by the state party chairman, Davies Ikanya, the Rivers APC said the recent campaign of calumny against Mr. Amaechi was borne out of the desire of some politicians to thwart the chances of the former governor getting an appointment.

“These retrogressive forces led by the state governor, Chief Nyesom Wike, are so afraid of the shadow of Rt. Hon. Rotimi Amaechi that they are willing to go to any length to ensure that he is not accommodated in President Buhari’s cabinet. They have for months mounted a relentless campaign of calumny against the person of Amaechi, thus biting the finger that once fed them. This is not only shameful but also a clear subterfuge against the greater interests of Rivers State”, Mr. Ikanya said.

The party expressed shock that Mr. Wike reportedly celebrated the non-appointment of Mr. Amaechi as Secretary to the Government of the Federation by President Buhari, alleging that the governor also planned to sabotage the screening of Mr. Amaechi by the Senate should he be nominated for ministerial position.

“We wish to advise Wike to stop trying to play God. We are confident that he can never constitute a stumbling block to Amaechi if President Buhari wishes to nominate him to render service to his fatherland in any capacity”, the Rivers APC said.

READ  Hon. Agboola Ajayi Will Not Be Missed After His Resignation – PDP

The party equally accused unnamed persons of sponsoring stories claiming that Amaechi was shocked by Mr. Buhari’s recent appointments and that he left for London to get himself together.

“Funny enough, Amaechi was in Port Harcourt to witness the formal commissioning ceremony of a church”, the party stated.

The party also described efforts to tarnish the image of Mr. Amaechi as an exercise in futility, saying nobody will deny the fact that he played a pivotal role in defeating former President Goodluck Jonathan.

Mr. Ikanya, therefore, urged the ex-governor to be steadfast in his support for the present administration, calling on the party supporters to exercise patience and allow Mr. Buhari to conclude his appointments before passing judgment.

World Bank Group Announces US$100 Million in Crisis Response for the...

My Song With Davido Will Be A Christmas Gift – Kiss...