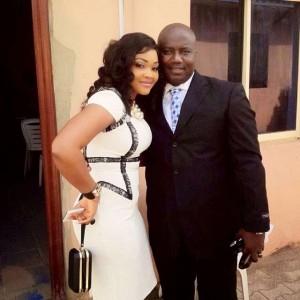 Mercy Aigbe’s husband, Lanre Gentry has recounted how he met her and revealed he had to pay 2 people to make her talk to her.

In a new interview with City People, the car dealer and hotelier said he met his wife after the crash of his first marriage.

He said he first laid eyes on her before she started acting, and met her through a man named Muyiwa.

“Mercy was not into acting then. Mercy was a staff of Zenith Bank for six months. When I saw her with him, I told him I like this girl ooo. That day she didn’t even answer. She is not friendly” said Lanre Gentry.

Determined to get her, he promised to pay Muyiwa twenty thousand Naira if he could link him with Mercy Aigbe.

Muyiwa went to her house in Maryland, and told Lanre that she was interested in marriage and not a boyfriend/girlfriend relationship. Lanre agreed to this.

Lanre Gentry and Muyiwa went to Mercy’s house in Maryland but met a woman named Bimbo. “On getting there, I met one lady, Bimbo. I was inside my car. Bimbo called her out. She refused. I now told Bimbo to talk to Mercy, that if she agrees I will give her N50, 000”. The woman spoke to Mercy and she came down to talk to Lanre Gentry.

In the car Mercy Aigbe told him that she already has a fiancée, Lanre said he is okay with that and he just wants to be her friend.

“She just called me and said Lanre where are you? I said I am at home. She said come and pick me. I was shocked! I said pick you? I rushed there. I met her crying. She said just take me out of here. Bimbo was there. She told me what happened. I now said I told you that is how we men are.”

Nobody Can Upturn This Country, Says Jonathan

Mental Health Patients Must Effectively Use Their Drugs – Raphael Ogbolu

Buhari Loses To AIT As Court Strikes Out Defamation Suit