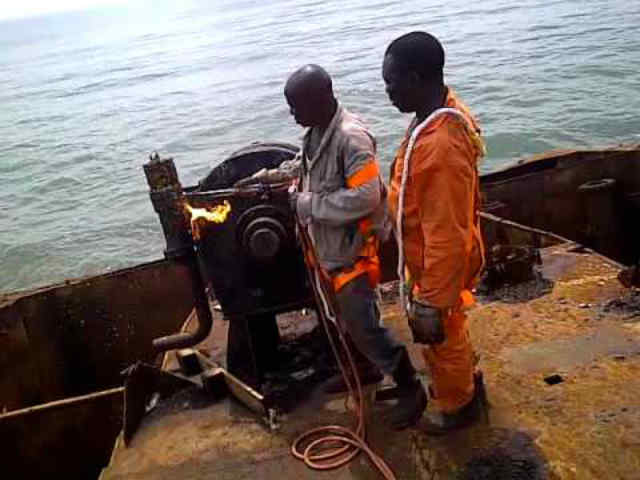 The President of the Ship Owners Association of Nigeria (SOAN), Mr Greg Ogbeifun, today called on investors to tap the potential of Nigeria’s ship-breaking and recycling sector. He made the call in an interview with our reporter in Lagos.

Mr Ogbeifun said that prior to this time, ship wrecks were taken to foreign countries for breaking and recycling but the cost of moving such wrecks had made it unprofitable.

“There are many wrecked ships scattered over the waterways of Nigeria. Until the 1960s, ship-breaking was considered a highly mechanised operation concentrated in industrialised countries such as the U.S., U.K., Germany and Italy. From the early 1980s, ship owners sent their vessels to the scrap yards of India, Pakistan, Bangladesh, the Philippines and Vietnam where payment, health and safety standards were minimal,” Ogbeifun said.

He said people were also desperate to work.

“The aim was to maximise profit but today, in Nigeria, these vessels are abandoned midstream and around waterfronts within the country. The cost of towing these vessels to other parts of the country makes it no longer profitable for ship-breaking and recycling of steel,” Ogbeifun said.

He, however, said that some companies had started shipyard expansion to key into the sector, which had potential for developing and giving the required service locally.

“Companies such as Starzs Marine and Engineering Ltd., operators of the Starzs Shipyard at Onne, have commenced shipyard expansion to incorporate ship-breaking. However, there is need for serious foreign partnership in terms of utilisation of the best available technology. There are small activities in ship-breaking by some firms down south in Calabar. The Indians have also indicated interest in partnership in ship-breaking with Starzs Marine and Engineering Ltd at Onne, Rivers,” he said.

READ  Several Conditions Must Be Met Before Schools Can Reopen – FG

Ogbeifun was optimistic that investment in the sector and the readiness to build capacity in the use of the required technology, would open the sector for greater number of jobs for Nigerians. [SOAN/NAN]

Vimbai Shares Fun Photos From Her Holiday At Zanzibar