More than seven months into the four years tenure of the Cross River State Governor, Senator Ben Ayade, there is no single indication that since the young vibrant Obudu born politician with inexhaustible developmental vision/ideas contested the 2015 gubernatorial elections and emerged as the number one citizen of the state courtesy of the overwhelming mandate of Cross Riverians there is no doubt that he has not only consciously work and walk with a single purpose toward the realization of his campaign promises and development blueprint but through his superior workable concepts which endeared the people more to him, he has emerged as a leader, political juggernaut of repute in Cross River.

Within this period, Governor Ayade has recorded reasonable achievements. Even the most unreasonable and greasiest of all critics knows that but deliberately concealed that within them as a result of pride and the pull him down syndrome. Others do so because they are influenced by external political forces out to get a pound of flesh on what may be seen as an attempt to get at Ayade to exert their real or imaginary vendetta.

Ayade has been able to change the mindset of the majority of Cross Riverians from viewing themselves and the state as being poor to the realization that the most important wealth and resources of any society is a people with the right frame of mind, attitude and ideological base and culture, and not just the trillion of barrels of crude oil and other natural resources on reserve, though these natural resources are imperative and veritable stimulators of growth and development, yet not in isolation of the human resources.

Though civil and public service jobs are a vital employment tools and developmental ingredients, Ayade has been able to positively push away the mindset and orientation of the people from being at home while being refer to as a civil service state and people to the need to break loose and make an aggressive in-road into the private sector, the world of industries and entrepreneurship and technological innovation. In Ayade, many young Cross Riverians have been able to also come to term with the eternal truth that whatsoever can be conceived by the human mind can equally be reduced into concrete term, and that all that is required is the right attitude and the push to get at one’s set goal/target.

Again, through the dexterity, audacity and the unquenchable determination to provide sufficient hope in the a world currently swimming in despondency due to the global economic crunch, crash in the price of oil and other commodities and to change the conventional global held economic theory that whenever there is a global recession, the work force should be drastically compress, Ayade has chosen an unfamiliar but sane path and terrain of rather providing more job opportunities to put food in the tables of thousands of families in Cross River State.

The traditional economic theory of reducing the size of the work force whenever there is a recession is a complete negation of the economy it strives fruitlessly to revamp. The simple logic is that when there is already hardship on the people and at the same times more persons are mindlessly thrown into the unemployment market, thereby compounding the recession crises. Keeping so many persons engaged and busy turn several persons from engaging in any antisocial activities and reducing crime in the society.

Within a short time in office, Governor Ayade has established Cross River State as an undisputable voice , advocate and leader on the battle against the increasingly surging oceans and sea level, the scourging sun heat or global warming and the Noah-like flooding being experienced global, called, “Climate Change”. Ayade who led other African governors to the 2015 Summit on climate change in Paris, France, spoke forcefully in support of the continent which suffers greatly from the activities of the multinationals and the need for the United Nations and other relevant world bodies to channel resources to assist Africa which takes the greater burden of the climate change.

Blessed with one of the world’s best remaining rain forests which is home to several endangered species, and working tirelessly to manage and conserve the forests for the good of the world, Ayade has brought in an innovation into the Carnival Calabar by introducing the Green Carnival, the first of its kind in the continent of Africa to stress the importance with which his administration attaches to the issue of climate change as 5 million trees are to be planted as part of the concerted efforts to checkmate climate change with its devastating effects on mankind. The theme of carnival was also hinged on climate change.

Ayade paradigm shift from the mundane ways of economic reasoning and his phenomenal strides in the arts of statecraft and governance has stand him out as a leader with great, articulate mind with ideas and innovations to drive development to the state, though there are a few who are yet to come to term with Ayade’s leadership style which to them is not in tune with what they know or the business as usual way of doing things.

It was based on this reality that sometime last year, Barrister Venatius Ikem in his article, “ The Ayade Phenomenon and the Crisis of Confidence in Cross River State”, agreed that Ayade comes into government with a daring steps to effect revolution in governance, a paradigm shift to a system which left some persons “bemused, sometimes confused and even disappointed”. He however added by asking the following questions, “is his zeal to develop the state not showing? In other words no matter your opinion of Governor Ayade and the direction of his government, don’t you think his efforts however you perceive them, are directed at achieving something positive for the state”?

Governor Ayade’s effort to bring in innovation to statecraft and governance, boost the avenue of sourcing for funds for social services and infrastructural development in a state like Cross River with very negligible share from the federation has attracted some misgiving from some persons who feels that the governor has refused to draw the line between business which is purely profit making and government which is service to the people. They also posited that the government new innovation in the art of governance was alien to them, not the normal way of doing things known to them. It is true that some persons find it difficult to accept or get adjusted to change, more so when they feel the change is sudden or that they cannot directly and immediately benefit from such change. But are the above position and accusations true?

Is it true that government now and always has nothing to do with business and profit making, and that the Ayade leadership’s paradigm shift is deliberately forcing a bitter pile down the throats of the citizens and that his government does not have a human face? Certainly, this is not true as it is a misrepresentation of Ayade administration stand for and has demonstrated for the past seven months.

First, it is historically verifiable that in an egalitarian and democratic society all over the world, Nigeria and Cross River State in particular, government had involved in business and still does so. For example, the former South-Eastern state of Nigeria (now Cross River and Akwa Ibom States), business outfits such as the liquidated Mercantile Bank and Manila Insurance were established as profit making outfits. The Government Printers, Cross River State Newspaper Corporation and CRBC were established as profit making outfits to handle government printing businesses, handle jobs from members of the public on profit basis, while at the same time serve as government mouth piece/information organ to the people and the carrier of the demands of the people to the government. Tinapa was established with government interest to make profit, just as the Calabar International Convention Centre (CICC), among others.

Again it is impossible for a governor who within his seven six months in office has abolished tax payment for the poor and low income earners in the state, embarked on regular payment of salary to state workers, even before the end of each month, lifted a 13 years embargo on employment and has concluded plans to build 5,000 houses which will be provided with electricity and water for the poor and the voiceless in Cross River State. The enabling law and the Agency to take charge of the 5,000 houses is already in place with several other people-oriented laws now passed and bills yet to be passed into law. The above achievements and policy thrust of Governor Ayade does not portray a wicked business man and a bourgeoisie who accumulate wealth at the expense of the masses but a true friend of the ordinary man and woman on the street.

Within the very short period under review, the administration of Ayade has attracted 500 Million Euros on PPP arrangement for the signature projects and another 10 billion US dollars from Henan Provincial Government of China for the building of China city in Cross River State including building Africa’s haulage centre in the state.

In seven month under governor Ayade, ongoing work at the garment factory that will employ about 2000 persons mostly women and widows in particular is at advance stage, groundbreaking for the signature projects performed, most of the streets in Obudu town, one of the five urban centres in the state are now being lid up by power driven by diesel turbines and is currently providing pipe borne water to more than 3,000 families in Obudu, thereby fulfilling the promise he made to the people during his thanksgiving service last year.

Between May 29, 2015 to December 31, 2015, Senator Ben Ayade has effectively laid a rock-solid base for the realization of the his development blueprint including the building of a new city, Calas Vergas in Calabar and other cities in the senatorial districts generation of additional 90 megawatts electricity, setting up of a state security outfit tagged “Operation Skolombo”, a poultry and a Rice city, etc, etc, etc.

Ayade is not beclouded; he has a crystal clear vision and direction on how the administration was going to administer the people, employing the scarce resources of the state for the good of all citizens. It is based on this reality that in his inaugural speech, he asserted that there was need that “Every foot is on the pedal, we aim to harness new ideas and technology to reconstruct our state, reform our schools to guarantee first class education for our youth and empowerment our citizens with the skills they need to engage a brave new world”! 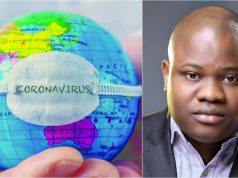 Stop Running Back Home During Elections, Stay Back And Defend Yourselves...

Kashamu Is Not Trying To Take Over Lagos PDP – Aide

My Weight Fluctuates All The Time – Khloe Kardashian