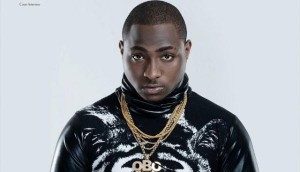 Nigerian pop star Davido, 23, has revealed that his father Chief Adedeji Adeleke had him arrested in 2011.

Davido who is on the cover of Fader Magazine revealed this during his interview with the international music publication.

Davido’s father gave the order to have him arrested because he had gone off the radar abroad and broken his sim card. When he came back in 2011 he was picked up by police men at the airport.

Below is an excerpt of Davido’s arrest from his Fader Magazine feature;

“His grades slipped, and after three semesters, he dropped out and left town without telling his father. First he went to Atlanta, where he used his older brother’s ID to get into clubs, and funneled the money Chief Adeleke sent for school and living expenses toward drinks and motels. Later, he threw out his SIM card and hopped on a plane to London, where he went MIA for several months as he shifted his focus from production to vocals. “There was no Snapchat, no Instagram. There was barely Twitter,” he says. “I just went off the radar.”

“Chief Adeleke, meanwhile, had been on the hunt for his son. When Davido finally returned to Lagos in 2011, with new tattoos and piercings, his father had him apprehended by police officers at the airport. Having failed to bring home the business management degree he’d been sent to America to complete, Davido reached a compromise with his father: he, still a teenager, would attend a private university two hours north of the city. His music dreams would be sidelined until he had honored his family by graduating. Davido returned to school, but often snuck out of his dorm room to hobnob at industry parties and blew off exams to record.”

READ  My Baby Is Breaking Things During Quarantine – Toolz

Davido last January signed a deal with Sony Worldwide. He is expected to drop his anticipated sophomore album this year.

Losing My Voice Was The Darkest Moment Of My Life –...

Lord Of Ajasa: “Today Musicians Do Not Deserve The Endorsements They...