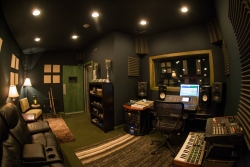 DIGILAND is the destination for digital disrupters, content creators, and entrepreneurs. Your home to create, connect and collaborate. As an epicenter for some of the most impactful leaders in media, entertainment and technology, it’s our turn to open doors for those actively designing the future.

Did you know that Southern California now officially has to the most tech companies in the U.S. — more than Silicon Valley? Millions move to SoCal each year with aspirations of entering the media, entertainment and tech industries. Yet, when people think of Southern California, they immediately think Hollywood, Santa Monica, or the new Silicon Beach (Venice/Playa Vista). However, Burbank has historically been a thriving hub for media, tech and entertainment — home to many of the most iconic innovators and companies across each industry. DIGILAND reflects the depth of Burbank’s rich and disruptive history, while tuning into the changing times of today’s tech-driven economy.

This is why DIGILAND has partnered with BNV Studios, a full service boutique recording studio, to bring you an unparalleled full studio rental, recording, mixing, mastering and production services, inside DIGILAND’s welcoming, eclectic and diverse facility.

Join DIGILAND as a member with their Spring Special: Membership starts at $299 for open seating at in DIGILAND 9am-5pm Mon-Fri. However, they are running a special till June 30 – Get their $499 Dedicated Work Desk with 24/7 every day Access, for just $299 for the first 3 months. This offer is only available for the first 10 who contact. Hurry.

Have you visited DIGILAND yet? What are you looking for in a collaborative workspace? Tell us what you think: http://goo.gl/forms/MNerPT2rr3r47NAN2

Support Group Should Abide By Our Rules – PDP