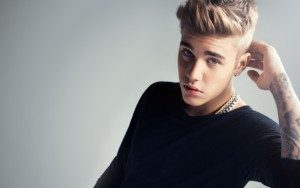 Seems like Justin Bieber has waded into the Kanye West and Taylor Swift feud.

The singer took sides on Tuesday morning, August 2, 2016. Bieber shared a screenshot of himself facetiming with rapper Kanye West, their joint manager, Scooter Braun, and a friend. That’s not what got our attention anyways, it’s his caption that’s serving some serious shade we first noticed.

He wrote along side the black and white photo, “Taylor swift what up.”

Recall that Taylor Swift and Kanye have recently had a vicious fight on social media followoing that infamous clip shared by Kim Kardashian of Kanye talking to Swift on the phone. In the short video, which Kardashian posted on Snapchat, Swift appears to be approving the rapper’s song, “Famous,” which she later publicly bashed.

This year has seen Bieber acting really bizarre. On May 11, 2016 he was seen walking around the city of Boston without any shoes. He was also spotted barefooted and feeding squirrels, while listening to music.

He also announced that he will no longer be taking photos with his fans. “I’m done taking pictures. It has gotten to the point where people won’t even say hi to me or recognize me as a human.”

On Friday, May 6, 2016 Bieber got a face tattoo in New York city which freaked out his fans who were not impressed with his latest ink.

A day after getting his tattoo Justin Bieber also broke down on stage in Philadelphia.

Haaland Has Nothing Against Manchester United – Mino Raiola