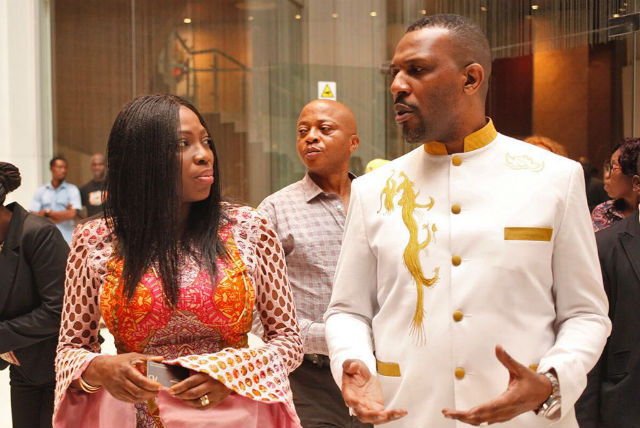 Rivers State politician and prominent entrepreneur, Prince Tonye Princewill has added another feather to his cap.

The most recent recognition came from the African Youth Global Network, an organization which cuts across West African countries and has a strong affiliation to the United Nations. Prince Tonye was awarded with the Nelson Mandela Pan-African Peace Ambassador Award for 2016 for his contributions towards humanity in the Niger Delta region and Nigeria at large.

A speech presented by the President of the organization, Dr. Laurent Agbemadji, summarized most of the selfless activities, done by Princewill over the years. From the flood relief intervention Princewill carried out in 2012, where his intervention was the first relief program to kick off, reaching the people who needed help even before the federal government could move in; to his various youth mentoring schemes, work with orphans, job creation activity and his support for entertainment.

His protest and eventual resignation as Chairman of the Niger Delta Vision 2020 subcommittee was a milestone in recognizing that the invasion of Gbaramatu was the wrong approach. This led to an alternative as seen in the amnesty program. Not a direct benefit to him, but to his community. A similar display of selfless intent when he supported Amaechi in 2007 as opposed to receive money to fight him.

The resolution that put Prince Tonye’s name on this years award was reached early this year at the organization’s executive meeting in its headquarters in Accra, Ghana. This was a followup to his nomination by Nigerian delegates at a similar meeting in December last year. His award was approved in a month, where normally it takes a year. In his very usual fashion, he was very reluctant to receive awards but accepted this after he had done his research. It had taken several months to track him down.

Others who have received this award in the past include Barrister Abdoulaye Wade, Former President of Senegal, Hon Soro Guillaume, current National Assembly President of Ivory Coast and HRH Chief Alfred Diete-Spiff, Amanyanabo of Town Brass and First Governor of Rivers State; just to mention a few.

In Princewill’s remarks, he thanked the team for the honour and assured them there will be no change in pace as he continued the fight for youths. He however observed that as he was fighting for youths, he was still doubtful that they were truly fighting for themselves. Their “semi involvement” in the electoral process, he said, left a lot to be desired and where they did get involved, it is primarily to rig or to participate in electoral violence. “If youths changed their agenda, the agenda for their countries will also change. This is why despite calls to run again, I will not be wasting my money and time to do so. The system does not want the best for Nigeria, so I refuse to be a part of it. My theory is if you can’t beat them, fight them.”

Meanwhile his long awaited production “76” has also been in the headlines for quite some time now and it finally premiered in Lagos, the entertainment capital of the country. Having toured some key festivals around the world, this was a homecoming in advance of the films debut in cinemas on the 25th of November. And to welcome it back to Nigeria, the organizers reached out to the First Lady of Nigeria, Her Excellency Aisha Buhari. To the surprise of many, she pledged her full support.

Representing Her Excellency at the premiere was the Lagos state First Lady Bolanle Ambode who dropped everything to make sure she attended the event. Senator Ben Bruce, Mrs. Aisha Oyebode, the first daughter representing the family of the late General Murtala and a celebrity list which would be the envy of even an awards ceremony or a Presidential dinner; sat down to watch 76. Nobody moved for 2 hours.

In the words of the First Lady after the film, “This is one of the best things that I have seen made from Nigeria and Her Excellency Madam Aisha who insisted I must be here will get the full report as soon as I get back. I dropped everything to attend this event and it could not have been a better use of my time. In the end, I was glued to my seat not wanting to even get up. You and your team have done Nigeria proud. Thank you.”

Aisha Oyebode nee Murtala, who heads the Murtala Muhammed Foundation was glowing with praises after watching the film. “You people have made an amazing film, unlike any other and what you did with the music is a work of art on its own. I’m speechless. Impressed does not even begin to describe the way I feel. You were brutally honest, but artistically true.”

Senator Ben Bruce who had earlier in the week predicted that the film would smash box office records raised his predictions even higher after watching the full film to say that it would surpass 2 million dollars in Nigeria and Ghana alone. Nobody has done this good a film. Nobody. It will appeal to the young, the old, women, men, lovers of comedy and lovers of history. It has pain, laughter, suspense and action. All tied up in one and it is so masterfully crafted, you don’t want it to end.”

At the end of the night, the cast and crew came out and took a bow to a more than 5 minute standing ovation. It could not have gone any better. 76 comes out in cinemas nationwide from the 25th of November but makes its next stop as the closing film for the African Film Festival in Lagos. That date is the 18th of November at the Filmhouse IMAX cinema in Lekki.

Fayose Will Deliver On His Electoral Promises – Lere Olayinka

Press Release: Datum signs up to the EU Code of Conduct...

Does A Pregnant Belly Makes You Uncomfortable? – Uche Jombo