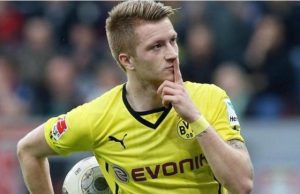 Coach Thomas Tuchel on Monday slammed the sending off that will see Marco Reus banned for Borussia Dortmund’s last Bundesliga match of 2016.

Fifth-placed Dortmund host Augsburg on Tuesday in their final game before the four-week winter break, but will have to do without their star winger, who was dismissed in Friday’s 2-2 draw with unbeaten Hoffenheim.

The 27-year-old was shown a second yellow card by referee Benjamin Brand on 41 minutes after a clash with Nadiem Amiri.

But Tuchel insisted that Reus “didn’t do anything”.

“It’s as if you were in the department store and the store detective said you stole something.

“The video footage shows you didn’t take anything, but then you’re chucked into the clink anyway for a week!”

There was some good news for Tuchel with French winger Ousmane Dembele fit to face Augsburg despite having been stretchered off against Hoffenheim with what turned out to be a bruised thigh.

“It looks like he can play tomorrow,” said Tuchel.

Gonzalo Castro and Erik Durm should return after knocks, but Portugal midfielder Raphael Guerreiro is still out with a thigh injury.

“He is not able to play, it’s not possible for him to train with the team, we hope that it will be possible at the start of training on 3 January,” said Tuchel.

US seeks to reassure Japan amid Ukraine crisis fallout

Atiku Became Our Presidential Candidate Via A Transparent Process – Aminu...