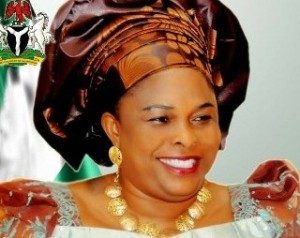 A Federal High Court Lagos, on Wednesday fixed Feb. 13 to hear a suit by ex-first lady, Patience Jonathan against the EFCC seeking to unfreeze her account.

Also joined in the suit are; Skye Bank Plc, and a former Special Assistant to ex-President Jonathan, Waripama-Owei Dudafa.

The ex-first lady is demanding the sum of 200 million dollars from the commission as damages for infringing on her rights.

She also prayed the court to issue an order discharging the freezing order, as well as restrain the EFCC and its agents from further placing a freezing order on the said accounts.

At the resumed hearing of the case on Wednesday, Jonathan’s lawyers, Chief Ifedayo Adedipe (SAN), sought for an adjournment to enable him serve his client’s amended claims on the companies.

He added that other defendants had been served with copies of the processes, while they have also served their counter-affidavits on the plaintiff.

In the absence of any objection from the EFCC’s counsel, the matter was eventually adjourned to Feb. 13 for further hearing.

In an affidavit in support of Jonathan’s suit and deposed to by one Sammie Somiari, he avers that on March 22, 2010, she (Jonathan) had opened five different accounts with Skye Bank, with the aid of one Damola Bolodeoku and Dipo Oshodi.

He averred that the account mandate forms were duly completed and signed by her.

Somiari stated that Jonathan subsequently discovered that apart from one of the accounts that bore her name, the other four accounts were opened in the name of four companies which belonged to Dudafa.

He also averred that she observed that the ATM cards of the said accounts were issued in the names of the companies, adding that she complained to Dudafa, who promised to effect the necessary changes.

According to Somiari, Jonathan is not a director, shareholder or participant in these companies and the funds in the said accounts are solely owned and operated by her.

“Dudafa does not own any part of the funds in the said accounts’’.

According to the deponent, the Skye Bank official, (Oshodi) did not affect the instructions of the plaintiff to change the name of the said accounts to her name, in spite of repeated request.

He averred that notwithstanding the refusal of the bank to effect the necessary changes, she had been using the said ATM cards without any interference.

The deponent averred that sometimes in July, Jonathan discovered that the ATM cards were not functioning, and immediately contacted the bank which informed her that a “No debit/freezing order’’ have been placed on the accounts.

He also averred that on further enquiry, the bank informed her that the accounts were frozen on the directive of EFCC as a result of ongoing investigation in relation to Dudafa.

Jonathan, therefore, contends that she was never arrested or invited by EFCC prior to the freezing order placed on the accounts.

She further contends that the freezing order on her funds by the directive of EFCC without an order of the court is unlawful and illegal.

Consequently, Jonathan is also seeking an order of court, directing the unfreezing of her account forthwith. She also wants an order restraining the EFCC from taking further steps in relation to the said accounts pending the determination of the suit.

Young Educated Graduates Are Drowning At Sea Trying To Cross Over...

I Am Still In A Little Bit Of Pain After My...