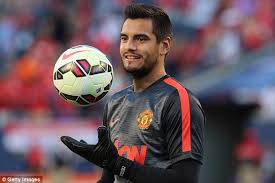 The role of second-choice goalkeeper at a Premier League club can be a thankless task, with hours spent sitting on the bench and appearances often limited to token outings in the cup competitions.

But which No. 2 is the best and most reliable back-up in England’s top flight?

The experienced understudy to Artur Boruc has his erratic moments and was playing this season when Eddie Howe’s team suffered embarrassing cup defeats against lower league opponents Preston and Millwall.

He has made just one league appearance in almost two years and failed to put pressure on regular No. 1 Lukasz Fabianski. Nordfeldt played in cup defeats against Man City and Hull this term.

The former England goalkeeper provides experienced cover for undisputed first choice Tom Heaton, but the 37-year-old has played three and lost three in the league this season after arriving on a free transfer from Blackburn last summer.

The 40-year-old has had a tough time backing up Lee Grant this season conceding 14 goals in five league games, and could drop to third choice at Stoke when England’s Jack Butland returns from a season on the sidelines.

He has endured a difficult campaign, having lost his starting spot to Republic of Ireland international Darren Randolph. Adrian has conceded nine goals in his last two games and not appeared since the 5-0 FA Cup defeat vs. Man City in January.

At 6-feet-8-inches, he is the tallest keeper in the Premier League but is firmly No. 2 to Heurelho Gomes. Pantilimon’s low point of 2016-17 came in a 6-1 defeat at Liverpool in November and he has made just five appearances overall.

READ  I Can Improve My Game - Haaland

The former Hull keeper has been a reliable understudy to Ben Foster, but opportunities have been limited, with only three appearances so far this season.

The Scotland international was signed as first-choice when he arrived from Cardiff last August but, despite some impressive performances for a relegation-haunted club, he has lost his place to Eldin Jakupovic.

Named as Ligue 1’s goalkeeper of the year prior to his departure from Marseille last season, he has struggled to overcome a knee injury in recent months. But he is regarded as top class when fit.

Signed by Pep Guardiola to replace Joe Hart, Bravo has real pedigree but has failed to adjust to life in England, to the extent that he now finds himself behind Willy Caballero in the pecking order.

The Germany international has made 13 appearances as understudy to Kasper Schmeichel this season, but has been unable to dislodge the Dane from the champions’ starting spot.

The 23-year-old is still regarded as the long-term first-choice by Jurgen Klopp, despite being dropped in favour of Simon Mignolet. At 23, Karius has presence and the attributes required to be a top keeper, but has yet to adjust to the demands of the league.

The former Arsenal man began the campaign as Sunderland’s starter, but injury handed a chance to the impressive Jordan Pickford and Mannone has been unable to reclaim his place. He can be erratic, but was also key in the club’s survival last season.

He divides opinion and had his reputation dented by playing both legs of the 10-2 aggregate Champions League defeat against Bayern Munich recently, but Ospina provides genuine competition to Petr Cech and is highly rated by Arsene Wenger.

The 27-year-old has made just two appearances this season due to the form of Fraser Forster, but kept clean sheets in both games. A lack of action at St Mary’s could force him to move elsewhere for the sake of his career.

The £8 million signing from Stoke in 2015 has been restricted to cup appearances this season due to the form of Thibaut Courtois, but has a proven record and could be tempted away from Chelsea this summer.

An injury to Maarten Stekelenburg has restored Robles to Ronald Koeman’s side and his recent form, which has seen him keep four clean sheets in five games, has been key in Everton’s return to the battle for a top-four finish.

Signed as David De Gea’s replacement in July 2015, he has been forced to act as understudy following the collapse of De Gea’s Real Madrid move. Romero has been a solid deputy, however, suffering just two defeats in 21 appearances over two campaigns.

READ  Messi Turns Up When He Wants To - Jose Mendilibar

He has the unenviable task of acting as understudy to Hugo Lloris but, having proven himself as one of the best in the league while at Swansea, Vorm is now arguably its most reliable back-up.

Senior Quantity Surveyor Job at a Construction Company in Nigeria

Rihanna Gets Tattoo Dedicated To Drake