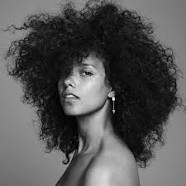 When The Voice crowned Chris Blue as the season 12 winner on Tuesday, it was a massive victory for his coach, Alicia Keys, as well.

After weeks of putting up with boasting and jocularity from stalwart Voice coaches Blake Shelton and Adam Levine, Keys mentored Chris through a season of serious competition and became only the second female coach to win The Voice after Christina Aguilera in season 10.

Blue and Keys opened up to reporters after the finale, and the “Girl on Fire” singer said she’s really most excited for beating Shelton.

“I gotta be honest…it’s a great dream of mine to put a whoopin’ on Blake Shelton!” Keys declared enthusiastically. “I couldn’t wait for the day!”

However, Keys graciously praised the season’s runner-up, Lauren Duski, who was one of two members of Team Blake to make it to the finale, along with Aliyah Moulden, who came in third place.

“Lauren is phenomenal,” Keys said. “I’m so, so proud of everybody that was on that stage tonight. This whole season has been such a beautiful group of people, and Lauren is especially special, so it was wonderful to see [them all] up there together.”

“I am proud to be the winner of season 12,” Keys concluded.

At the press conference, Keys also addressed Blue’s talents and strengths, and why the young Knoxville, Tennessee, had what it took to win.

“Chris just has a really uncanny ability [to] really perform to capacity no matter how much [pressure] he might be battling internally,” she shared. “Somehow he gets out on that stage and he delivers in a way that’s not only emotional, but powerful.”

“He is going to grow into one of the greats,” she added. “I really believe it.”

As for Blue, he said he really appreciated “being mentored by one of the greatest minds to ever walk the face of this planet.”

The newly-crowned champ explained that, as the season went on and the field of competitors narrowed, he got to spend more one-on-one time with his coach. “That’s when I really began to feel the magic of the relationship that we have.”

During Tuesday’s finale, Blue performed an emotional duet of the REM classic “Everybody Hurts,” alongside former Voice coach Usher.

Nigerians, UN And International Bodies Must Unite For To Defend Our...

Chibok Abduction Beginning Of The End Of Terror In Nigeria –...