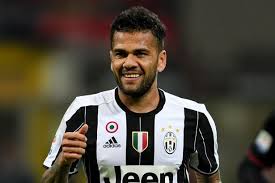 Gabriel Jesus is excited about the prospect of teaming up with Dani Alves at Manchester City because he will help motivate the players.

The 34-year-old right-back, who confirmed his departure from Juventus on Tuesday, is set to join City after agreeing a two-year deal, but Chelsea also made an approach.

As a move has not been confirmed, his 20-year-old compatriot pleaded with him to join and believes that coach Pep Guardiola can be a decisive voice in making it happen.

“It has not yet materialised, but when it does, I’ll be quite happy,” he told Brazilian TV show Noite dos Craques.

“I’m worried he’s not sure yet. Come on, shall we, Dani? (laughs). Between Chelsea and City, it would take Pep Guardiola to make that difference.”

Having teamed up with Guardiola in the second half of last season following his move from Palmeiras, the striker says he is enjoying life under the former Barcelona boss.

“He is a very nice guy, humble, a little tense, but a very good person,” he said. “He is intense in football. It’s football all the time. You meet him and you discuss football. I live in the same building as him, he’s my neighbour.”

READ  Sancho Is A Type Of Player Klopp Needs - Heskey

Jesus also discussed Brazil team-mate Neymar, revealing that a special friendship has blossomed since they won the gold medal in the 2016 Olympics in Rio.

“I’m very fond of Neymar, not only for the quality that everyone knows about, but for the person he is. I met him at the Olympics, he treated everyone well, even though he was the star of the competition. He was a normal person. He took on the responsibility and made the whole group like each other.

“This guy for me today is a great friend and a brother. He has always treated me, my friends and my family well. He came to visit me in Barcelona when I went for an operation, he likes me. I really like him.”

My Support For De Gea Is Unconditional – Mata

Verisign to Present at the J.P. Morgan Global Technology, Media and...