The Government of Iran has successfully tested a space-launch vehicle called Simorgh. The rocket has the capability of carrying satellites, a local media reported yesterday..

Simorgh is able to carry satellites weighing as much as 250 kilogrammes at an orbit about 500 km above the Earth’s surface.

The launch, carried out by Imam Khomeini Space Centre, marked official inauguration of the space base, which is responsible for all operations related to satellite carriers, including preparation, launch, control and steering.

It added that the base would be able to meet all the country’s needs at low Earth orbit after final phase of its development.

The launch came after warning Washington of a response to new US sanctions over the Islamic republic’s ballistic missiles program.”

A Fox News corresponded said that the launch was confirmed by an unnamed US official, but the details were unclear.Western states suspect Iran of developing the technology capable of launching long-range ballistic missiles with conventional or nuclear payloads, a charge denied by Tehran which insists its space program has purely peaceful aims.

Iran’s four other launches of domestically produced satellites since 2009 have all sparked condemnation in the West.President Hassan Rouhani said Wednesday that Iran would respond in kind to any breach by the United States of a 2015 nuclear deal after the House of Representatives passed a new sanctions bill.

The Iranian parliament’s national security and foreign affairs committee said it would hold an extraordinary session on Saturday to discuss its formal response.

The parliament voted earlier this month to fast-track a bill introduced in June that would increase funds for Iran’s missile program and Revolutionary Guards.

“We must always develop our defense capability and we will strengthen our defensive weapons regardless of the opinion of others,” Rouhani said.

The US House passed a new sanctions bill on Tuesday targeting the Revolutionary Guards over its missile program. As part of its space program, Iran has also sent two capsules into space, the first in February 2010 carrying a rat, tortoises and insects, and the other in January 2013 when a monkey was sent into space and returned to earth safely, according to official media.
(Xinhua/APA/NAN)

APC Can Think All They Want About Me And Hushpuppi, I Won’t Respond – Dino Melaye 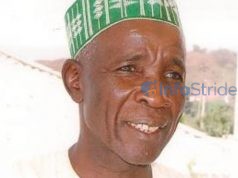 Going to San Diego Comic-Con? Put On Your Mask for the...

Put Some Respeck On My Name – Blac Chyna

Buhari, Osinbajo Fail To Publicly Declare Their Assets As Promised