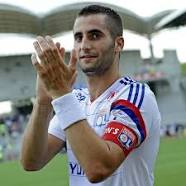 Roma have completed the signing of central midfielder Maxime Gonalons on a four-year contract from Lyon.

Gonalons, 28, joins Roma for €5 million having entered the final year of his deal at Lyon.

“After speaking with Monchi and the coach about their ambitions, I did not hesitate for a moment,” he told Roma’s official website. “For this reason there were no issues and everything was agreed very quickly. I cannot wait for this new adventure.”

Roma sporting director Monchi added: “Maxime is a footballer of international stature. In addition to his technical ability, we are delighted to add his experience and personality to our group. I am extremely happy to be able to welcome him to AS Roma.”

A France international, Gonalons made his international debut in November 2011 and has won seven caps in total. He is eighth on Lyon’s list of games played having made 330 appearances for the club.

Meanwhile, Roma’s new right-back Rick Karsdorp will be out for around four weeks after undergoing knee surgery.

The 22-year-old only joined the Giallorossi last week from Feyenoord in a €19 deal but is now set to begin a rehabilitation plan.

Karsdorp, who signed a five-year deal at Roma, will face a race against time to be fit for the start of the Serie A season, which begins on Aug. 20.

“The surgery revealed a small lesion on the anterior meniscus. The surgery was completed without issue, and Karsdorp will soon begin his rehabilitation plan.

READ  Coutinho Wants To Be An EPL Player Again - Agent

“The recovery is expected to take around four weeks.”

Mourinho Is An Inspiration To Young Coaches – Andre Villas-Boas

Total and Worldline set to Support the Deployment of the Guichet...

Virological analysis: no link between Ebola outbreaks in West Africa and...

The African Union makes a pressing appeal for an immediate end...

Juliet Ibrahim Heaps Blame On Her Family For Her Divorce