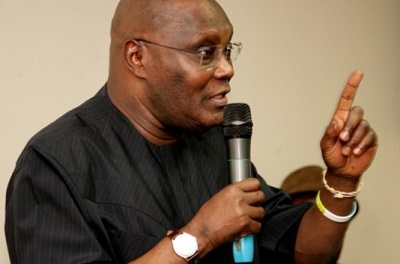 The All Progressives Congress (APC) has said that it is yet to receive a letter of resignation from the party from former Vice President, Alhaji Atiku Abubakar, being reported in the media.

According to Atiku, the situation in my former party left me and several other loyal party members in limbo, not knowing which of the parallel executives the legitimate leadership was.

He said, “It was under this cloud that members of the APC made the appeal to me to join their party.

“It was on the basis of this invitation and assurances made to me that I, being party-less at that time, accepted on Feb. 2, 2014, the hand of fellowship given to me by the APC,” he said.

But Abdullahi said that the APC leadership has not seen any formal notification on the purported resignation, adding however, that based on what “we have seen in the social media, we can say that it is surprising”.

“For us politics is all about interest; so, if the former Vice President feels that his interest is better served elsewhere, we don’t have any issues against that.

“We can always wish him good luck. For us, the task of building a political party is not a day’s job; it is a marathon.

“And, it takes many years and we will continue to improve on our system to get the kind of party we want to really build,” Abdullahi said.

If Liverpool Should Let This EPL Title Slip, It Will Make...

Varonis to Present at the Jefferies 2014 Global Technology, Media and...