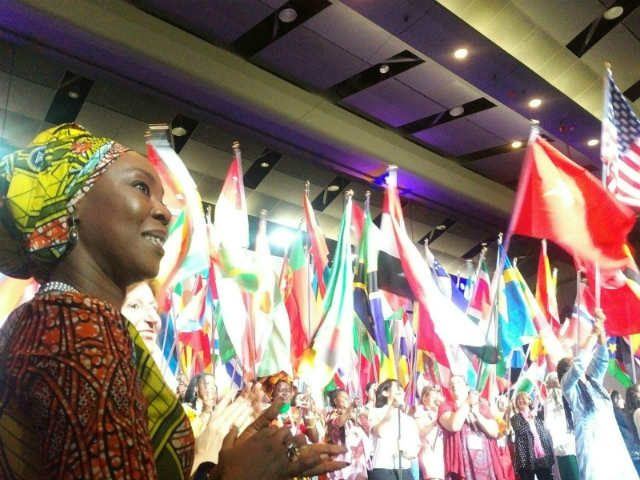 Toyin Saraki, the wife of Senate President, Bukola Saraki, has attacked the Nigeria Police Force for making false claims about the blockade of her husband’s convoy by police officers.

While speaking on Channels Television on Wednesday, July 25, Force Public Relations Officer, DCP Jimoh Moshood, reiterated the position of the police force and suggested that Saraki ‘stage-managed’ the blockade to curry public favour.

He said, “I want to make it abundantly clear that the force has no hand in the blockade. In the first instance, these are what were stage-managed for the purpose of waving public sentiment in his favour.”

In response to DCP Moshood’s comments on Wednesday, Toyin Saraki took to her Twitter account (@ToyinSaraki) to dismiss his insinuation that the trucks seen in the blockade were for her protection. She urged the police spokesperson to leave her out of the ‘unseemly contretemps’.

She posted, “Dear @channelstv @sunrisedailynow I am absolutely flabbergasted by PoliceNG Jimoh Moshood on TV attempting to claim that these white vehicles that blockaded the road outside our Abuja residence could possibly be “protection provided to the Wife of the Senate President”!

“Firstly I have never received any vehicle from @PoliceNG. Secondly, I believe these vehicles bear a striking resemblance to cars donated by my dear brother @AlikoDangote. I hope DSP Jimoh Moshood can leave me out of this unseemly contretemps. Thank you!

“While the challenges of criminal justice administration in Nigeria are crying out for urgent reform, it would speak better of us as a nation, to conduct rights respecting processes, eschewing malicious sensationalism to ensure that truth and justice prevail, on Offa and always.”

The Publication of the Controversial List of Hidden Company Directors Links...

Can Real Madrid Cope Without A Reliable No 9?