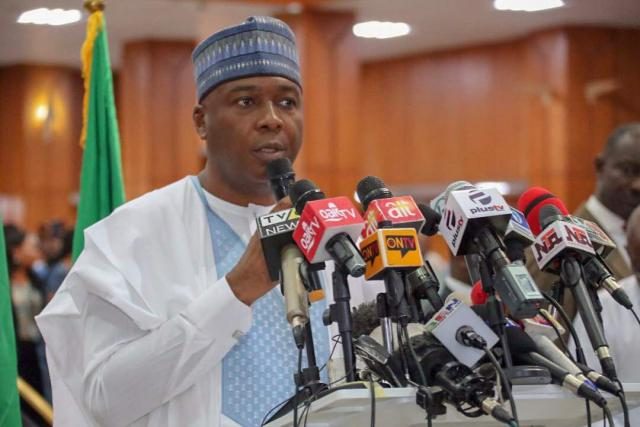 Bukola Saraki has officially declared his intention to join the race for president in the 2019 general elections.

The former Kwara State governor made his declaration in Abuja on Thursday, August 30, 2018, just weeks after he disclosed that he was making consultations.

He declared his ambition at the Sheraton Hotel, Abuja, while meeting with young politicians and aspirants interested in running for public office in 2019 under the newly signed Not Too Young To Run Act.

According to Saraki, his decision to run for president is in response to the calls by Nigerian youths who prompted him.

He said the overwhelming harsh conditions in several sectors of the country fueled his resolve to run for president so he can turn things around. He promised that his administration will be driven by a youthful energy and vowed to spearhead a new agenda that will transform the lives of ordinary Nigerians.

Let me say, once again, how wonderful it is to see so many talented and purposeful young people at this first edition of the Public Dialogue Series with Political Parties on Youth Candidacy and Party Primaries. Looking at you, I see future leaders who present themselves as capable and worthy to take on the mantle of leadership in this country, and this gladdens my heart.

“From my interactions with many of you, and with your contemporaries across the country, I can see that we are blessed with a determined generation that stands ready to join with us to power a Nigerian renaissance. The quality of people I see here today affirms my belief that, indeed, you are Not Too Young To Run.

READ  The South-East Is Not Prepared For Presidency - Shettima Yerima

“I deeply appreciate this opportunity to share some of my ideas about where we are as a nation, as well as the challenges before us as we approach the great decider that is the 2019 General Elections.

“It is widely acknowledged that ours is a relatively ‘young’ country bursting with tremendous energy, ability and potential. More than 70 per cent of our population is under the age of 40. You are indeed the future of this country. Ordinarily, such a young population would be the envy of many Western countries that are faced with ageing populations, but the dire state of our affairs tarnishes the youthful advantage that we have.

“Up and down our country today, Nigerians are crying out for succour. Many of our children are hungry. Many people are dying of avoidable or otherwise treatable diseases. Many have fallen below basic living standards, and are now among the 87 million that sealed Nigeria’s position as the country with the highest number of people in extreme poverty. Our young people lack opportunities. The necessary education facilities and system to equip them for the future simply do not exist. We are not creating the jobs needed to usefully engage them in order to grow our economy. And too often, the youth feel shut out, prevented from having any say in the direction of this nation.

“The harsh conditions of extreme poverty faced by the people, fuels the state of insecurity all over the country. Hunger, lack of education and lack of opportunities push many Nigerians into criminal activities including terrorism. Many of our communities are paralysed with fear – due to incessant communal crises, kidnappings and other social ills, as well as the threat of terrorism. We are failing abysmally to tackle the problems of today and to prepare for the future.

“Our economy is broken and is in need of urgent revival in order for Nigeria to grow. GDP growth rate has declined. Diversification remains an illusion. Unemployment is at an all-time high. Businesses are shutting down. Jobs are being lost in record numbers, and the capital needed to jumpstart our economy is going elsewhere.

I mSpy: New Key Logging App Could Track your Every Move

Women Are Under-Represented In All Political Structures In Nigeria, Says Senate...