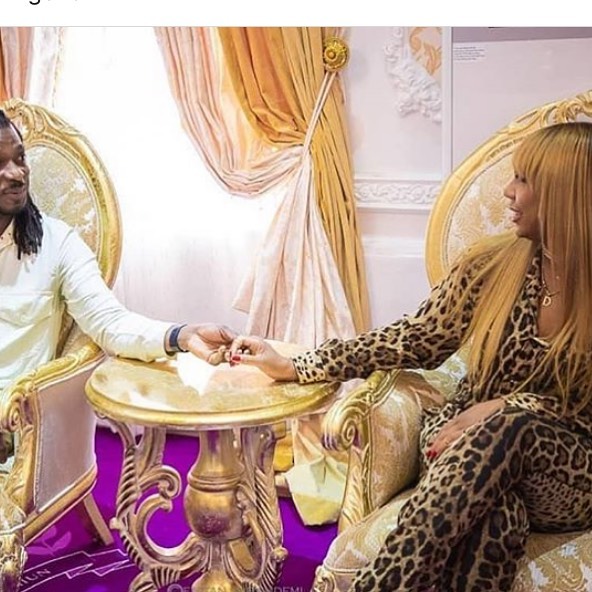 US singer and reality TV star, Tamar Braxton, who is presently in Nigeria with her Nigerian boyfriend, David Adefeso, has penned down a cute piece about him and the love they share.

Tamar jumped on Instagram to share the amazing piece, hailing her man for staying by her side as they continue to enjoy their vacation in Nigeria.

See the pic she shared,

Alongside the picture of them holding hands, she wrote: “I don’t know why I can’t stop looking at this picture. The way he’s holding my hand makes me stare at it. It says so many things. There has been times in Nigeria where I had NO IDEA where I was, or what was going on, but not for one second did he leave my side. He had me in every way. THIS is what holding your woman down is. I remember when @otgenasis said it… and I’ve said this before… all that other stuff is cool “but who gone Fck with you FOR REAL”!!! I’ve had my handheld.

This picture should be no big deal. But, I don’t think I’ve had it held like this. There is a difference. It’s clear that this is where he WANTS to be. He’s only thinking of US. It’s not forced. This is a SOLID man. For so long, I didn’t think I deserved that. Because I didn’t know anything else. I settled for the not returned hold. Ladies, Make sure when you hold them they hold you back. This is what we deserve. God bless yall ??”

Braxton began her career in 1990 as a founding member of The Braxtons, an R&B singing group formed with her sisters. The Braxtons released their debut album, So Many Ways, as a trio in 1996, and disbanded shortly afterward. In 2000, Braxton was briefly signed with DreamWorks Records and released her debut self-titled album, but was dropped by the label following the album’s poor commercial performance.

Braxton reunited with her sisters for the WE TV reality series Braxton Family Values (2011–present).

Following a thirteen-year break, Braxton released her second studio album, Love and War (2013), through Epic Records. The record proved to be a commercial success, receiving 3 Grammy Award nominations, including Best Contemporary Album. Braxton’s third album, Calling All Lovers (2015), achieved similar success and spawned the Grammy-nominated single “If I Don’t Have You”. Her fourth album, Bluebird of Happiness (2017), topped the Billboard Independent chart.

Braxton served as a co-host of the Fox Broadcasting Company’s talk show, The Real, from 2013 until 2016. In 2017, Braxton signed a multi-series deal with Steve Harvey’s television studio, East 112th Street Productions. Since, Braxton announced that a talk show and scripted series are in development. Braxton is also set to star in the upcoming film Gangland (2019), directed by Jean-Claude La Marre.

Marriage Does Not Scare Me – Cossy Orjiakor

Kwara Women In Inter-faith Prayer Over Abduction Of Schoolgirls