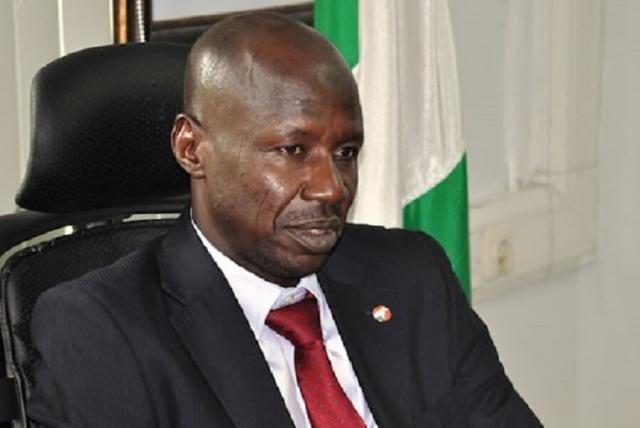 Acting Chairman of the Economic and Financial Crimes Commission, Mr Ibrahim Magu, has come out to say that EFCC is working on the rehabilitation of young people who are engaged in Internet fraud, popularly known as Yahoo Yahoo boys.

He revealed this in Lagos yesterday as he delivered a paper titled, “Strategic change administration and innovation to curb corruption in Nigeria,” at the 3rd All Administrators National Conference of the Chartered Institute of Administration

According to Magu, Internet fraudsters can be useful to the agency in years to come.

His words, “So if you carry money from Nigeria and escape to Ghana, we will just call the men in Ghana and say, ‘arrange this man and keep him for me.

“This is what the Yahoo-Yahoo boys like to do. But we are planning to rehabilitate them because they can be useful to us in future.”

Ibrahim Magu (born 5 May, 1962) is a Nigerian police officer who was appointed Acting Chairman of the Economic and Financial Crimes Commission (EFCC) on 09 November, 2015 after chairman Ibrahim Lamorde (who has earlier served twice) was sacked by President Muhammadu Buhari. Both Lamorde and Magu served during Nuhu Ribadu’s time at the anti-graft agency and were also credited with part of the success Ribadu recorded in his time.

Magu was born on 5 May, 1962 in Maiduguri, Borno State. He attended Maiduguri’s primary school (from 1969 to 1975), Waka Biu’s Secondary School from 1975 to 1980 and Ahmadu Bello University, Zaria from 1982 to 1986 where he graduated with a B.Sc Accounting. After the completion of his National Youth Service Corps, he served in various Ministries and Departments in the Borno State Government as an Accountant and rose to become a Zonal Accountant before he voluntarily resigned to join the Nigeria Police Force as an Assistant Superintendent of Police in 1990. He was the Coordinator, Nigeria Police Building Society before moving on to Special Fraud Unit (SFU) of the Nigeria Police Criminal Investigations Department (CID) where he served as a team leader in charge of Financial Crimes, Money Laundering and Advance Fee Fraud investigation.

On 4 August 2008, he was arrested following allegations that police discovered EFCC files and a computer containing classified documents at his Abuja residence. Presently, he is a member of the investigative committee convened by National Security Adviser (NSA), Babagana Monguno on the orders of President Muhammadu Buhari to probe the procurement of arms in the Armed Forces from 2007 till now.

Magu remains unconfirmed as the Chairman of EFFC which is one of the challenges and controversies being faced by the administration of President Muhammadu Buhari on appointments and nominations confirmation. The Police Service Commission (PSC) on Friday, 28 April 2018 announced the promotion of 18 senior officers after her 27th Plenary Meeting which ended in Abuja where Magu was promoted to the rank of a full commissioner from deputy commissioner.

At the end of the 8th Regional Conference of Anti-Corruption Agencies in Commonwealth Africa held at Transcorp Hilton (Abuja, Nigeria) on 19 May 2018, Magu has emerged their new chairman. His appointment was the highpoint of a five-day regional conference with the theme: “Partnering Towards Assets Recovery and Return”.

PDP Committed To Securing A Better Future For Nigerian Youths –...

Ensighten Raises $40 Million in Series B Funding From Insight Venture...