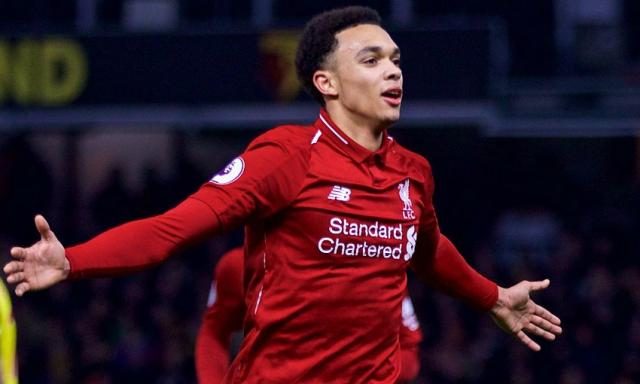 Liverpool right-back, Trent Alexander-Arnold has said he would be pleased to play in midfield since he has always modelled his game on club legend Steven Gerrard.

Even though he is a defender, the youngster has done well in the attacking end, with his 12 EPL assists in the EPL last season being the most ever recorded in one campaign by a defender.

With a couple of assists and a goal to his name already this season, Arnold has shown his versatility at a very young age and has now admitted that he would be able to cope as a midfielder if he was asked to play the role.

His words, “Obviously I’m a defender first and foremost, then I want to try and help the team create chances,” Alexander-Arnold said on Wednesday.

“For now the manager has decided I’m a right back. That’s where I’ll play. I’m really not fussed where I play. I just want to play football.

“If a manager decides to use me in midfield, or as a centre-back or a striker then that’s where I’ll play.”

“[I modelled myself on] Gerrard, really. Everything about his game I always admired. I always studied him and wanted to be like him,” Alexander-Arnold said.

“It’s maybe not that important to compare because at a young age, you haven’t achieved the things those types of players have. It’s difficult to say whether you will or won’t. Who knows?

“Being regarded in the same bracket as them is something the best players want.”

“Obviously without him who knows what would’ve happened. He’s the one that’s given me the most opportunities, more than I can even ask for,” he said.

“He’s obviously put a lot of trust and faith in me personally and I’ve tried to repay him every time he’s done that. Obviously a massive thanks to him and hopefully there will be four more years of success.”

HP Introduces Its Most Premium and Versatile PC