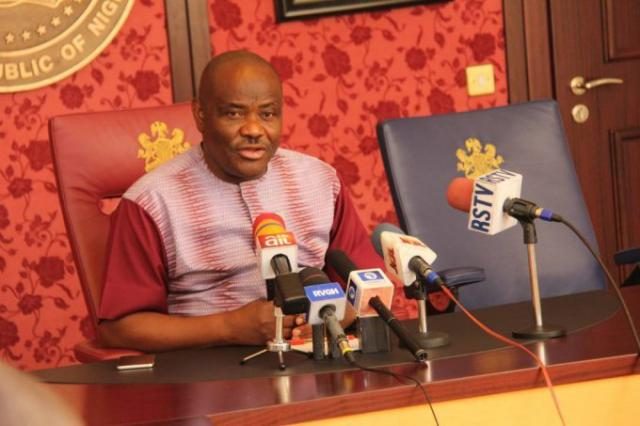 Rivers State Governor, Nyesom Wike has urged the Nigerian Army to concentrate on their traditional role of securing Nigeria, rather than illegally delving into politics, which has tarnished their image.

According to him, the army neglecting its vital constitutional responsibility has massively hindered its ability to perform.

Wike said this during a Courtesy Visit by Joint Senate and House of Representatives Committee on Army at the Government House Port Harcourt on Friday.

His words, “The Army should be sent to where there are serious security infractions. “But the reality today is that everyone now has soldiers attached to them while the general security of the country suffers.

The role of the Army is to defend the territorial integrity of the country and maintain general security. The Army must return to their primary responsibility”.

“The Army has supported us in terms of fighting insecurity and kidnapping. They have worked with other security agencies to improve the security of the State.

“But they played very negative roles during the elections. The Army was involved in ballot snatching and attempts to subvert the will of Rivers people. The authorities should work hard to change the perception of the Army on the streets.

“There is no Governor in this country that can challenge the level of support that we have availed the Nigerian Army. We funded the operationalization of the 6 Division of the Nigerian Army. I have never turned my back on the Army or any security agency in terms of logistics and funding.”

“The level of security in Rivers State wouldn’t have been achieved without the support of Governor Wike. If all governors were doing same things in addressing security challenges like Governor Wike, the country would have been better off”.

2Face Idibia Is The Only Man I Have Ever Loved –...

Communiqué Issued at the End of a 2-Day Oyo State’ Information...