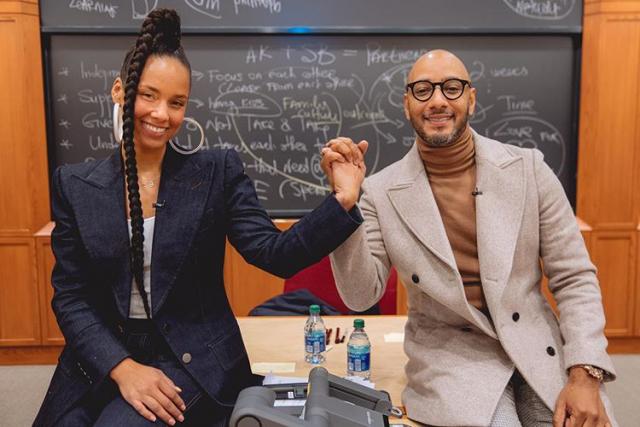 Popular couple, Alicia Keys and Swizz Beats were recently at the prestigious Harvard University where they presented a paper on their lives.

The Grammy award-winning singer has now jumped on her Instagram page to flaunt a picture of her hubby and herself at the university.

She added that it was deep that she and her man were being used as a case study for success in such a huge university.

His words, “Friday was a powerful day. My baby @therealswizzz and I presented our case study on our lives and business at @HarvardHBS.⁣ Professor Boris Groysberg created three case studies: one of me, one of Swizz and one of us together.⁣ That’s actually never been done before! It broke down business, leadership and how to have a successful business/life balance. ⁣It was fascinating seeing our lives on a chalkboard. ”

“At Harvard. Being used as a case study for success 🤯🤭⁣ It was sooo deep, seriously, it even uncovered things for me while I was sitting there. ⁣ I want to thank Professor Boris Groysberg, @daimo1, @meaghansmom and @Anaklara8 for your hard work on coordinating this powerful moment. ⁣As a kid, I would’ve never imagined this!!⁣ Everything is possible!! ⁣If we can do it, you can do it better⁣. ⁣Love, gratitude, and blessings❤️”

Alicia Augello Cook (born January 25, 1981), known professionally as Alicia Keys, is an American musician, singer, and songwriter. A classically-trained pianist, Keys was composing songs by age 12 and was signed at 15 years old by Columbia Records. After disputes with the label, she signed with Arista Records, and later released her debut album, Songs in A Minor, with J Records in 2001. The album was critically and commercially successful, producing her first Billboard Hot 100 number-one single “Fallin'” and selling over 12 million copies worldwide. The album earned Keys five Grammy Awards in 2002. Her second album, The Diary of Alicia Keys (2003), was also a critical and commercial success, spawning successful singles “You Don’t Know My Name”, “If I Ain’t Got You”, and “Diary”, and selling eight million copies worldwide. The album garnered her an additional four Grammy Awards.

READ  Trolls Should Not Come For My Daughter - Cardi B

Her duet “My Boo” with Usher became her second number-one single in 2004. Keys released her first live album, Unplugged (2005), and became the first woman to have an MTV Unplugged album debut at number one.

Keys has received numerous accolades in her career, including 15 competitive Grammy Awards, 17 NAACP Image Awards, 12 ASCAP Awards, and an award from the Songwriters Hall of Fame and National Music Publishers Association. She has sold over 65 million records worldwide. Considered a musical icon, Keys was named by Billboard the top R&B artist of the 2000s decade and placed number 10 on their list of Top 50 R&B/Hip-Hop Artists of the Past 25 Years. VH1 also included her on their 100 Greatest Artists of All Time and 100 Greatest Women in Music lists, while Time has named her in their 100 list of most influential people in 2005 and 2017. Keys is also acclaimed for her humanitarian work, philanthropy and activism. She co-founded and is the Global Ambassador of the nonprofit HIV/AIDS-fighting organization Keep a Child Alive.

The Anti Corruption Crusade Of Buhari Should Not Be Condoned –...