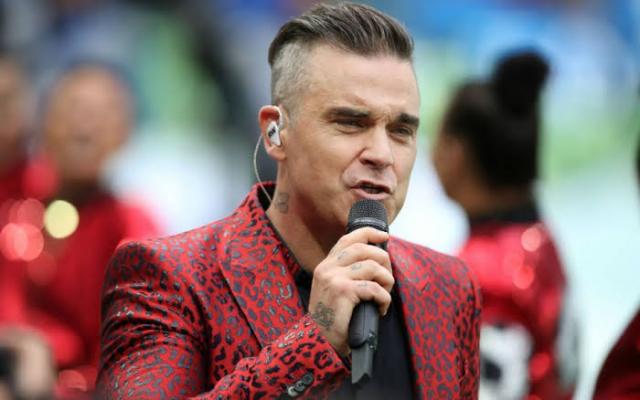 Popular singer-songwriter, Robbie Williams has come out to say that he has not owned a smartphone since 2006.

According to him, he has not even had access to his social media accounts since that time.

He said he got rid of all his mobile phones because he does not like them.

“I don’t have my password to anything otherwise my career would be over,

“I tell several people what to put on there and then that gets vetted and then it doesn’t go on. ‘It will be like a walkie-talkie to my mum, my dad, my wife or my kids…everything else gets done by email.”

Robert Peter Williams (born 13 February 1974) is an English singer-songwriter and entertainer. He found fame as a member of the pop group Take That from 1989 to 1995, but achieved greater commercial success with his solo career, beginning in 1997. Williams has released seven UK number one singles and ten out of his eleven studio albums have reached number one in the UK. He is the best-selling British solo artist in the United Kingdom and the best selling non-Latino artist in Latin America. Six of his albums are among the top 100 biggest-selling albums in the United Kingdom–four albums in the top 60–and in 2006 he entered the Guinness Book of World Records for selling 1.6 million tickets of his Close Encounters Tour in a single day.

Williams has received a record eighteen Brit Awards—winning Best British Male Artist four times, two awards for Outstanding Contribution to Music and the 2017 Brits Icon for his “lasting impact on British culture”, and three MTV European Music Awards. In 2004, he was inducted into the UK Music Hall of Fame after being voted the “Greatest Artist of the 1990s”. According to the British Phonographic Industry (BPI), Williams has been certified for 19.8 million albums and 7.2 million singles in the UK as a solo artist. He is also one of the best-selling music artists of all time, having sold 75 million records worldwide. Williams also topped the 2000–2010 UK airplay chart. His three concerts at Knebworth in 2003 drew over 375,000 people, the UK’s biggest music event to that point.[5] In 2014, he was awarded the freedom of his home town of Stoke-on-Trent, as well as having a tourist trail created and streets named in his honour.

After a fifteen year hiatus from the group, he was re-united with Take That on 15 July 2010, co-writing and performing lead vocals on their album Progress, which became the second fastest-selling album in UK chart history and the fastest-selling record of the century at the time. The subsequent stadium tour, which featured seven songs from Williams’s solo career, became the biggest-selling concert in UK history, selling 1.34 million tickets in less than 24 hours. In late 2011, Take That’s frontman Gary Barlow confirmed that Williams had left the band for a second time to focus on his solo career, although the departure was amicable and that Williams was welcome to rejoin Take That in the future. He has since performed with Take That on three separate television appearances, and has collaborated with Barlow on a number of projects—including the West End musical The Band.

READ  Ministry of Finance, Budget and National Planning Is Only Trying To Save Lives – Reno Omokri

Williams was born on 13 February 1974 in Stoke-on-Trent, Staffordshire, England. His parents, Janet (née Farrell) and Peter Williams (also known as Pete Conway), ran a pub called the Red Lion in Burslem, before his father became the licencee at the Port Vale FC Social Club; this led to Williams’ lifelong affinity for the team. His maternal grandfather was Irish and hailed from Kilkenny. Williams attended St Margaret Ward Catholic School in Tunstall, before attending dance school UKDDF in Tunstall. He participated in several school plays, and his biggest role was that of the Artful Dodger in a production of Oliver!, the musical adaptation of the Charles Dickens novel Oliver Twist.

Turning Down Man United Was The Right Choice – Vidal