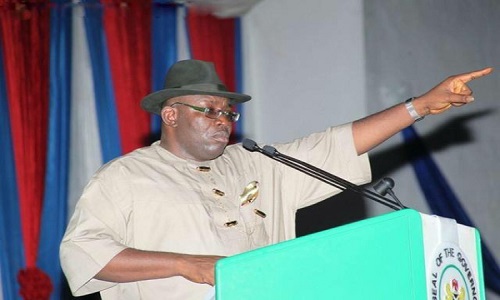 The All Progressives Congress, APC, in Bayelsa State has urged state governor, Seriake Dickson, to desist from heating things up in the state with wild allegations and inciting comments.

APC revealed this in a statement by the state Publicity Secretary, Doifie Buokoribo, saying that Seriake has been dishing out threats and increasing tension after the defeat of his candidate at the recently-concluded governorship election.

The party added that the governor has not shown commitment to the democracy we preach in Nigeria.

Their statement read, “In the last few weeks, since the overwhelming victory of our candidate, Chief David Lyon, at the November 16 governorship election, Governor Seriake Dickson has inundated the state and, indeed, the country with wild allegations and inciting comments.

“He has screamed blue murder at all relevant institutions of state, from the electoral body to the security agencies, and the winning All Progressives Congress. And he has absolved only himself and his section of the Peoples Democratic Party of blame.

“From his furious mind, Dickson has issued threats to the electorate in Bayelsa State and APC members, particularly, and he has boasted about his capacity to unleash violence and turn the state upside down.

“Dickson has displayed everything, but commitment to democratic ideals and legal processes of electoral conflict resolution.”

RequirementONE is Now Available on G-Cloud 8

My Tackle On Oscar Was Accidental – Rooney

I Was Hired To Attack Nasarawa Villages; 25-year-old Suspect Confesses