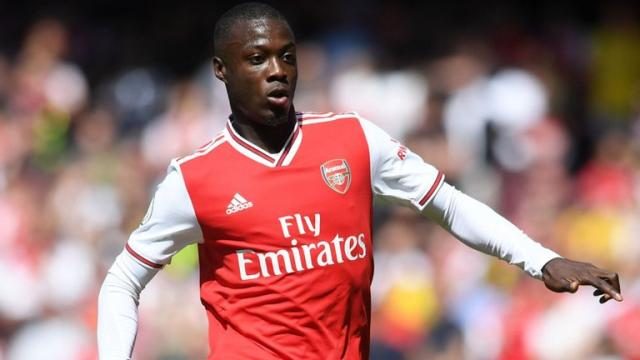 Arsenal forward, Nicolas Pepe is prepared to make up for past errors when Arsenal host Sheffield United at Emirates Stadium this evening.

The Ivorian missed a sitter that would’ve given his club the lead in a game they eventually lost in the previous clash between them.

Speaking ahead of Saturday’s clash, he has said he believes the team can seal their 3rd victory under Mikel Arteta.

He added that Arsenal must stop dropping points for things to get better.

His words, “It’s going to be difficult, but it’s not impossible. Looking ahead, our sole focus is on getting a win in our home game against Sheffield United, and in general we have to stop dropping points and making silly mistakes,”

“I missed a very good chance when we played them earlier in the season, but I’ve managed to score other opportunities that I’ve had.

“It’s not something I’ve thought about since then – on the day, it was a chance that would’ve given us a 1-0 lead, but I’ve put it to the back of my mind.

“All players miss opportunities, but I know the goals will come – that’s part of football. I’m ready to put it right in the match on Saturday.”

On his performances, “I’ve done OK, but I can certainly do more. In fact, I must do more, and that is certainly something I will be looking to improve on during the second half of the season,” he continued.

“The hardest period so far for me was when the team went through a difficult spell when we weren’t managing to win a game.

“We worked hard as a team throughout this time and we finally managed to get that victory at West Ham last month, which was an important moment for us and the fans.”

“The manager has stressed the importance of defending well as a team, and making interceptions when our opponents are trying to attack,” he added.

“He’s shown that he has real confidence in me, and he knows exactly what I’m capable of. In terms of working on my own game, he wants me to get into one-on-one situations, get crosses in, score goals and get assists, of course.”

FINE+RARE Extends Sales Model for Wine with Sceneric and hybris