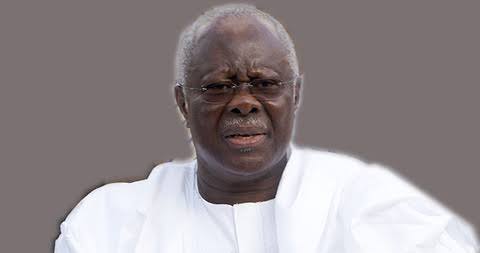 Foremost chieftain of the Peoples Democratic Party (PDP), in Lagos State, Otunba Segun Adewale has said since Engr. Deji Doherty was elected as the State Chairman, peace has been back in the party and the emergency reconciliation organized by Chief Bode George’s camp is now far from necessary.

Otunba Segun said this at a recent meeting with Engr. Seyi Makinde and Chief James Ibori in attendance.

According to him, Chief Bode George is allowed to host any dignitary since he is an elder of the part, but the meeting held yesterday at his Lugard office, was not on behalf of the PDP because no one at national level reached out to the state on any reconciliation committee or meeting.

He added that Bode George should not be the one calling for a reconciliation meeting since he is the genesis of the crisis in the state.

His words, “Bode George cannot call for any reconciliation meeting because, he was the genesis of the crisis in the State, this he explained that, when the National officers came to Lagos last year, an election was conducted in line with section 47 (6) of the party’s constitution, but Bode George and his candidate, Adegbola Dominic, who was appointed temporarily for just 3 months by the party, took us to court, calling the conduct of the election illegal, which is causing the ruling APC and Lagosians to laugh at us as unserious political party.

“The only reconciliation that is needed has been done by the Chief Ben Obi, Senator Biodun Olujimi and Engr Muktar committee, who came to the State before the election in 2019.

READ  Fayose Is A Leading Light Of The PDP – Eddy Olafeso

“Unfortunately, the leaders that matters like myself, who started the movement that ousted Dominic, who suddenly became a sit tight chairman, after his tenure expired in December 2018, the South West Chairman, Dr. Eddy Olafeso, State Chairman, Engr. Deji Doherty, Senator Ben Obi, Senator Olujimi, serving members of Federal Reps from Lagos, partly elders across the local government, and other important personalities were not involved, even if the meeting was to be a reconciliation meeting. A newbie, who just rejoined the party was the one being paraded as chieftain of the party, which is a grave error and laughable.

“Chief Bode George is an elder, but what he has done is an affront on the power of the National leadership of the PDP, which should be meted with appropriate sanctions, his action is a calculated attempt to rubbish all the efforts of the National leadership, who is working very hard to bring peace and stability to Lagos PDP, so that it can have a good outing in 2023.

“For those of us who understand Lagos politics to a large extent, the State cannot be won by just mere making noise in the media, but rigorous activities at the grassroots, which we have done before and will still do better again.

“Engr. Makinde is a sincere man, who wants the region to move forward, no doubt, but, he must not allow himself to be used by the Bode George faction of the party, to sell wrong signal and narrative to the public and party members, I respect him a lot and he should make more findings so that he can understand the peculiarities of Lagos PDP and its attendant headaches.

“Finally, I wish to use this medium to strongly warn Babatunde Olalere Gbadamosi (BOG), who just rejoined the party, to take it easy, and not allow himself, out of desperacy for gubernatorial ticket, to be used by those who will be willing to negotiate the party in 2023.

“When new members or old member joins a party, the constitution is clear on what should be done, he should not tag along with those who are interested in just factionalising the party. He ought to know that, as a new join, all leaders must be accorded their due respect.”

Wizkid And Saeon Beef: M.I Criticizes Saeon For Revealing How Much...

Another piece in the DevOps puzzle – Redgate launches ReadyRoll at...