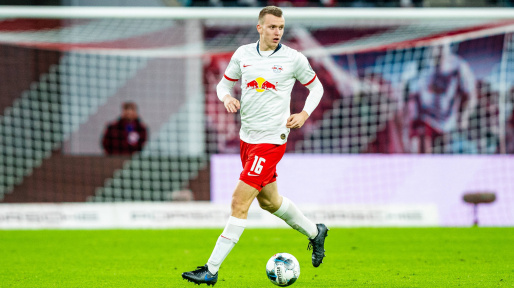 Ex RB Leipzig coach, Alexander Zorniger has come out to say that Lukas Klostermann is fast enough to stop a player like Kylian Mbappe in a football game.

Alexander recently revealed that Klostermann’s development in the Bundesliga has been nothing short of extraordinary.

According to him, Lukas’ speed is a weapon on the pitch and he is an incredibly valuable for any coach.

He added that the fact that highly gifted attackers can ruin a team during games is why consistent performers like Lukas are needed in every team.

His words, “His development is very, very extraordinary,”

“Thanks to his speed, he could even stop Kylian Mbappe.

“We got Lukas from VfL Bochum in 2014. At that time, Peter Neururer was a coach. Peter is known for being straight with his opinions – he doesn’t shy away. Peter said: ‘Lukas is on the best path to becoming a national team player’.

“Lukas’ speed was – and is – a weapon. He has a great family and stays very grounded. At the same time, he also had significant issues with his technical ability, which is why I thought: ‘It’s still a very long way to the national team’. But Peter showed great foresight with Lukas.”

“He is very, very rarely evaluated extremely positively after a game, but he always achieves at least 85 per cent of his maximum performance,”

“This is incredibly valuable for a coach.

“Highly gifted attackers in particular can sometimes drop off in terms of performance. That’s why you need consistent performers like Lukas, Willi Orban or Dayot Upamecano in your team.”

Okada Riders In Lagos Migrating To Ogun State Are Not Welcome...

INEC Is Only Wasting Time By Not Announcing Nyesom Wike’s Re-Election...