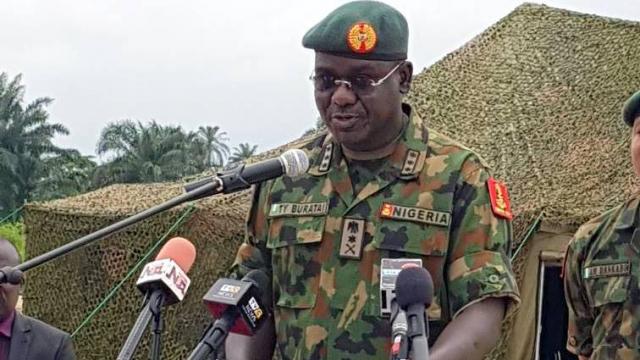 The Chief of Army Staff, Lt.-Gen. Tukur Buratai has come out to say that the military will not engage in dialogue with bandits or any criminal.

He revealed this at a news conference to mark the commencement of the Nigerian Army Day Celebration (NADCEL) 2020 on Wednesday at the Army Special Super Camp, Faskari, Katsina State.

According to him, anyone expecting him to take that route to end insecurity in the country is mistaken, because that will never be his style.

He added that maybe when he drops the uniform, he might consider dialogue, but nobody should look forward to that for now.

His words, “May be when I drop the uniform, I may consider that but for now, it is not the military option,”

“Some newspapers quoted me as saying that the troops should move into the bush and defeat them tactically; that is our mission and that is what we want to achieve. Anything short of that will only prolong the insecurity.

“It is unfortunate that some politicians are taking military operations beyond what it should be, that is, to the political domain.

“All those allegations are false. We are a professional army; we are responsive, and I have always stressed that we must be responsive to our operational needs, to the challenges of our country and to our troops’ welfare.

“Some have even gone further to say that the Nigerien forces are coming in to intervene to deal with bandits in our territory.

“We will continue to resolve any insecurity that comes.

“We will only be seen not to have done anything when we don’t respond, but on all the insecurities across the country, whether in the North-East or North-West, a lot has been achieved.”

My Fiancee Is One Of A Kind – Bill Gates’ Daughter