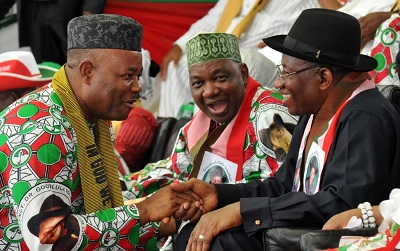 Gov. Godswill Akpabio of Akwa Ibom said the continuation of President Goodluck Jonathan in office in 2015 would ensure the delivery of more dividends of democracy to Nigerians.

He stated this on Tuesday in Abuja during the formal declaration of President Jonathan to contest the presidency in 2015.

Akpabio, who is also the Chairman of the PDP Governors Forum, said the governors supported President Jonathan for a second term because of his achievements in the past three years.

“We went down and we saw the dams and the irrigation projects in the north; we saw what you are doing in the railway system.

“We noticed your efforts at empowering farmers; we took cognisance of your efforts in the power sector; we looked at the many roads that you have done across Nigeria.

“After taking cognisance of your efforts, we resolved that we are not going to contest against you.

“We are not going to show any interest in the presidency; that we must give you a second term in office for you to complete your good works”, he said.

According to him, the governors are confident that President Jonathan would consolidate on his achievements and continue transforming Nigeria if given a second term.

Akpabio, however, reminded President Jonathan that the battle ahead was a difficult one, adding that the route to 2015 would not be smooth, but assured that he would triumph at the end.

He described President Jonathan as the biblical David, saying that “you are fighting all the wars today so that future Nigerian presidents will have peace”.

Gov. Akpabio noted that Jonathan had taken the right step by establishing the Almajirai schools, particularly in Northern Nigeria and other schools in the South.

This step, he said, would ensure the education of Nigerian children and that they were not misled into terrorism and acts insurgency in future.

He added that PDP governors were against terror, enemies of progress, propaganda, and blackmail.

Akpabio described members of the opposition as selfish politicians who had nothing to offer Nigerians and should therefore not be allowed to take over the Federal Government in 2015.

“We cannot hand over our future to people who are blackmailers and propagandists”, Akpbio said.

He, however, expressed optimism that the PDP would win at least 30 states in 2015, adding that it would reclaim states it lost to the All Progressives Congress (APC). (NAN)

I Thank God For Blessing Me With My Son – Anita Okoye