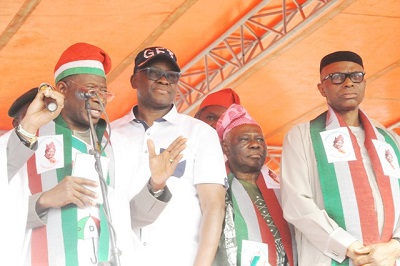 The Director General of the Peoples Democratic Party Presidential Campaign Organisation, Dr. Ahmadi Ali, yesterday faulted the reason given by the Independent National Electoral Commission, INEC, for the shift in dates for the general elections, saying the electoral body was not fully ready for the polls.

INEC Chairman, Prof. Attahiru Jega, had announced the shift in dates for the elections from February 14 and 28 to March 28 and April 11, citing unfavourable reports from the National Security Adviser, Sambo Dasuki, indicating that the military will not be available to provide security.

But Ali, who addressed a press conference, which was also attended by the Director of Media and Publicity of the organisation, Chief Femi Fani-Kayode, said INEC postponed the polls to save itself from “monumental embarrassment”, just as he also faulted the use of card readers for the elections.

He said, “There are also reports that the PVC readers are not fully distributed and tested. How can INEC handle cases of faulty card readers?

“Do they have a credible plan B in situation where voters line up and the card readers refuse to work? Ballot boxes are reportedly inadequate. Adequate training of INEC’s members of staff for the election had not been concluded and other problems facing INEC.

“Quite clearly the shift in election date is meant to save INEC from monumental embarrassment. I would like to reiterate that the PDP is ready for the election any day.

“We are querying the INEC for some aberrations in the distribution of PVCs.

“How can Borno State which is under siege register more PVC collections than Lagos State?

“The INEC might have allowed the distribution of its cards to be tampered with.

“We hope that INEC will now use the extra time it has given itself to perfect its methodology; for example the card readers need to be tried and tested during the training of its operators”, he said.

The PDP campaign director general noted that with the general elections, more military personnel were needed to be on ground to forestall any breakdown of law and order as well as prevent political miscreants from rubishing the country’s electoral process.

Ali added that Nigeria in conjunction with sub-regional forces, had recorded a tremendous success in the fight against Boko Haram in the recent well-coordinated repel attacks from all flanks around North-East bloc of the country, stressing that within the six weeks extension period for the election, the military would have ended insurgency in the region.