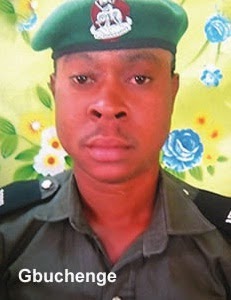 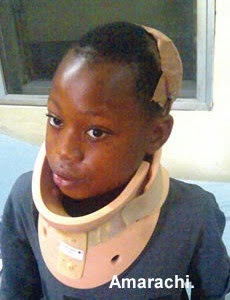 It’s really crazy and scary the rate at which officers that i meant to protect and guide the citizens of this country are abusing their powers, especially by sexually assaulting both minors and grown up women.
The residents of Olufowobi Street, Ketu, Lagos, were shocked to learn of an eight-year-old girl, Amarachi Abakwam, that was found tied up and brutalised under the bed of a policeman attached to Police Mobile Force 22.
The policeman, Augustine Gbuchenge, with Force number 400823, lived in the same compound with Amarachi’s family.
The father of the victim, Patrick, said that on the fateful day he had been looking everywhere for his daughter until they discovered her under Gbuchenge’s bed.
Read the report below: –
“There was power failure on that day so everywhere was dark. I asked after Amarachi but my wife said she was probably in our apartment sleeping.
“I was not satisfied with this explanation because my children don’t usually sleep early. When I went up, I did not see my daughter so we started asking around. Some little children in the compound then told me that Gbuchenge had called my daughter earlier to help him buy akara.
“I went to the policeman’s room to challenge him but he denied seeing my daughter so we continued looking everywhere. After sometime, the whole compound got involved in the search and all clues pointed to the policeman.”
Last Thursday, I returned from work around 7.30pm and met my children and wife outside. There was Patrick said he and the other neighbours challenged Gbuchenge again and an argument ensued.
He said Gbuchenge immediately stood up and threatened to go and tell his colleagues at the Ketu Police Division that he was being wrongly accused of abduction.
“Some moments later, I also stood up and headed for the police station to go and report the matter thinking I would meet the policeman there as well but I did not. After reporting the matter, a police corporal accompanied me back to my house,”
It was learnt that when they returned to the house, Gbuchenge was nowhere to be found and his room was locked.
“We were able to beam a torchlight through his window where we saw my daughter’s legs pointing out from under the bed,”
Neighbours were said to have rallied around and broken Gbuchenge’s door open.
When the little girl was finally pulled out from under the bed, she was bound by her hands and feet while a piece of cloth had been stuffed in her mouth.
Amarachi was said to have been bleeding profusely as she had sustained a broken skull.
She was subsequently taken to Gbagada General Hospital but due to the severity of her wound, she was referred to the Lagos Island General Hospital.
Narrating her ordeal, Amarachi said
“On that day, he (Gbuchenge) asked me to buy akara for him. After I returned, my mum asked me to go upstairs to do the dishes. As I was going, the man pulled me from behind and took me into his room.
“He then tied me up. He did not r*pe me. After sometime, my parents started shouting my name and calling me, the policeman used an iron to hit me in the head repeatedly and then pushed me under the bed and used clothes to cover me. Under the bed, I saw little children’s clothes.
“He then turned on his generator so that even if I tried to shout, no one would hear. After sometime, he left. I continued to hear my father’s voice and I struggled to push my leg from under the bed. That was how they saw me and rescued me.”
The Lagos State Police Public Relations Officer, Ngozi Braide, confirmed the incident in a text message sent to Punch. She said efforts were on to determine if the suspect was indeed a policeman.
She said: – “I heard of the wicked act. MOPOL 22, which is where the complainant claims the suspect works has been contacted. However, the commander in charge of MOPOL 22 said there was no person with such a name or identity in his squadron.
“Meanwhile, we have sent signals to other police departments and stations to ascertain if the man is actually a serving policeman. The act is inhuman and the suspect will never go unpunished.”