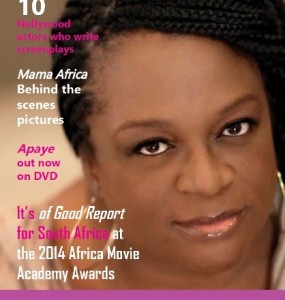 Veteran movie icon, producer, writer, director — Amaka Igwe got what she deserves as she wash immortalized on the cover of Nolly Silver Screen magazine’s June edition.

“Though the pain is still fresh in our hearts, we know we just had to celebrate one of Nollywood’s legends,” says Isabella Akinseye, Editor of Nolly Silver Screen. “Indeed, Amaka has made it easier for us as women to aspire to be great in the industry. I remember reading her magazine TMC Box Office years ago. Little did I know that the seeds were being sown to start my own magazine. She inspired us without even knowing.”

In the magazine, the Nolly Silver Screen team pays tribute to Amaka Igwe and a special infograph ‘15 Scenes from Amaka’s Life’ designed by Gbolahan Adams is also featured. In addition, the magazine’s cartoon strip ‘Rollicking Nollies’ is also dedicated to the late filmmaker.

Newspaper columnist and film critic, Wilfred Okiche returns again with a profile on ten Nollywood actors who write screenplays and compiles a top five list of Nigerian movie locations. ‘What’s in a name? Nollywood and its movie titles’ by Agina Eberechukwu looks at audience response and perceptions. Another article is Isabella Akinseye’s ‘Africa Movie Academy Awards: A decade of uniting, celebrating and rewarding African filmmakers’ which was nominated for the 2014 AMAA Media Recognition Award.

Living Funeral director Udoka Oyeka; Director, Nollywood Centre at the Pan-Atlantic University, Dr Ikechukwu Obiaya and Mama Africa producer, Norbert Ajaegbu are interviewed in this edition. Also featured in this edition are pictures from the 2014 Africa Movie Academy Awards, the full list of winners and 2014 AMAA Media Recognition Award nominees. Regulars such as Nolly Pop Quiz, Wisdom from the Stars, DVD releases, on set pictures, reviews and vox pop are also in this issue.