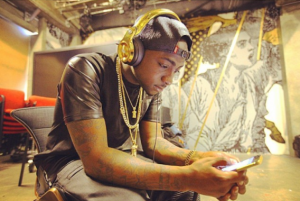 Well, we all know that Davido isn’t that celebrity that you might want to mess or play silly games with as the singer is always ready to fire back.

Davido sent out a tweet about him turning 23 later this year and a fan replied saying he thought Davido meant 32.

This reply didn’t go well with Davido and he replied the fan calling him blind and broke.

I Can’t Be A Complete Housewife – Anita Joseph

Luis Enrique Will Not Reveal Squad Against Valencia