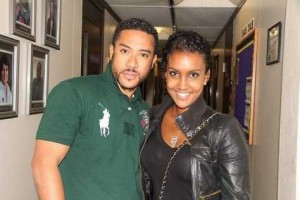 According to Stacy Amoateng (host of Restoration With Stacy) award winning actor, Majid Michel and wife will renew their wedding vows on Saturday, August 1, 2015.

The host of Restoration With Stacy, an interactive talk show which airs on TV3 promised the couple an all-expenses paid event when the actor appeared on the show few months ago.

“This is what we’re going to do, you’ve done so well, you’ve been with your wife for so long, you guys have been there for each other so we are giving you a treat. And with this treat, all you need to do is to provide us a date… And you and Virna can say I do again,” she said on the show.
The actor responded with, “I want a trip to the moon. Honeymoon on the moon…I’m going to stand outside and shout.”

In an exclusive interview with GhanaGist, Stacy revealed that, the wedding which is in two parts is scheduled for Saturday August 1, 2015.

“The wedding is in two parts. Part one in the garden and part two a banquet on August 1 at the La Palm Royal Beach Hotel”, she confirmed to GhanaGist.Com.

Majid and Virna union have been blessed with two daughters, Zara and Kiera Michel.