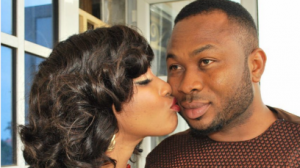 Contrary to reports, Churchill through his spokesman Mr Paul, said that Rose is not his personal assistant and he has no intimate relationship with Roseline Meuer.

The philanthropist in an interview says Roseline is a Women and Child ambassador of the Churchill Foundation and what they share is just business.

According to Mr Paul,
“The foundation is all about empowering people. Our purpose is to be a blessing to the people of the world. Starting with Nigeria.

Still speaking about the chairman of Churchill group’s relationship with Rose,

“That’s a wrong allegation as I’ll say. She’s actually the brand ambassador for the Big Church group, the foundation and her focus is of Mother and child.

She’s been with us for about two years and some time later this year that contract should be over.”

Talking about the car rumoured to have been given to the actress by Churchill,

“There are all sorts of sponsored attacks because of issues that are private to the chairman and his family.

READ  Your Education Must Reflect In Your Behaviour, Not A Certificate – Naira Marley

All this comes after the mum of one said her husband used her as a punching bag and cheats on her.