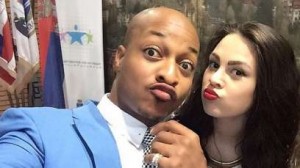 A nosy troll who thinks IK Ogbonna’s marriage might have crashed didn’t get what he bargained for as he was dragged by the actor on his Instagram page.

The gist is that IK Ogbonna’s wife had taken to her Instagram page on Wednesday, August 22, 2018, where she posted a cute photo of their son and herself. She went on to caption the photo with a quote,

“Welcome to the good life baby #WhenYoMamaIsYourG #NewDayNewAdventure #Mediterranean #boatCruising.” A nosy follower then took to her comment section where he perceived that there might be cracks in their marriage.

“Oh…guess you and his dad are no longer together and the kid is gonna go stay with u?” he wrote. As usual, IK Ogbonna came to his wife’s rescue as he didn’t have nice words to say to the intruding follower.

@lexo_bronxy Are you guessing or are u wishing? My bro go and worry about 2019 elections and how you will eat tmrw,” he replied.

This isn’t the first time IK Ogbonna will be coming for disrespectful of nosy followers who try to attack his family on social media.

Bury Your Ambition Of Ruling The State Again, Bayelsans Have Rejected...

Buhari Is Not Focused On The Survival Of Democracy In Nigeria...