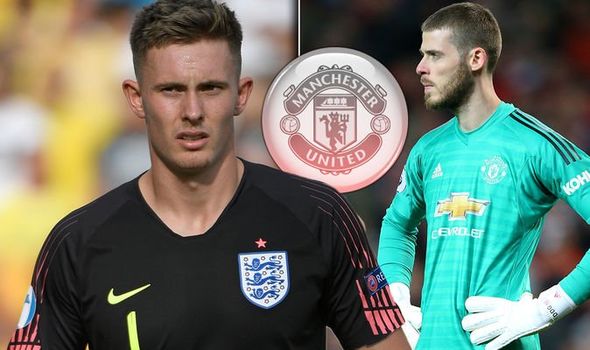 Manchester United goalkeeper, David de Gea has been told that his spot at the club is under threat because Dean Henderson also feels he has what it takes to be Man Utd’s No. 1.

De Gea is still the Number one at the club and has committed to a new long-term contract.

However, ex GK coach, Eric Steele feels Dean can challenge De Gea and be the first choice GK by next year.

His words, “He has all the physical attributes you need,”

“Plus that cockiness and confidence about him. He sees himself as the biggest challenger to David de Gea at Manchester United and I love that. Even though he is not at the club right now.

“Knowing Dean as I do, what he will be thinking is, ‘Richard Hartis (Manchester United’s senior goalkeeping coach) and Ole Gunnar [Solskjaer], please keep sending your scouts to Sheffield United’.

“He knows he is being watched. He knows what is required. David de Gea has signed his new deal. There are some good goalkeepers at the club. Sergio Romero is talented, while Lee Grant is a very good senior goalkeeper.

“But Richard Hartis will be asking, ‘Who is going to challenge De Gea?’ I am sure Dean will be thinking he can be the No.1 at Manchester United.”

“I give him great credit for that. There are seven English goalkeepers playing in the Premier League. A really good group.

“But he has come through the England set-up. We have a good group of young players who will continue to provide Gareth with headaches.

“Dean just needs to keep his feet on the ground. He is working with a good goalkeeping coach in Darren Ward. The manager also definitely won’t let him get ahead of himself. He is at a good club.”

Buhari Should Come Up With A Fresh Supplementary Budget – PDP