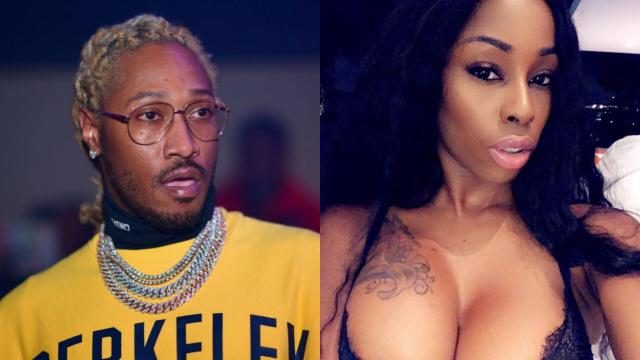 According to the lyricist, the paternity lawsuit filed against him by the Haitian model must be dismissed.

According to court documents obtained by a popular site, Future is responding to the case brought by a Florida woman named Eliza Seraphin. He filed a motion to dismiss which accuses Seraphin of “fraud upon the court.” He denies being the father of her child.

She is also requesting retroactive child support and reimbursement for hospital expenses during her pregnancy, which Future is unwilling to comply with.

A hearing has reportedly been set for November 8, where Future and Eliza are expected to face off in court.

We wait to see how this will pan out.

Nayvadius DeMun Wilburn (born November 20, 1983), known professionally as Future, is an American rapper, singer, songwriter, and record producer. Born and raised in Atlanta, Georgia, Wilburn first became involved in music as part of the Dungeon Family collective, where he was nicknamed “the Future”. After amassing a series of mixtapes between 2010 and 2011, Future signed a major record label deal with Epic Records and Rocko’s A1 Recordings, which helped launch Future’s own label imprint, Freebandz. He subsequently released his debut album, Pluto, in April 2012 to positive reviews. Future’s second album, Honest, was released in April 2014, surpassing his debut on the album charts.

Nayvadius DeMun Wilburn was born on November 20, 1983 in Atlanta, Georgia. He began using his stage name while performing as one of the members of the musical collective The Dungeon Family, where he was nicknamed “The Future”. His first cousin, record producer, and Dungeon Family member Rico Wade, encouraged him to sharpen his writing skills and pursue a career as a rapper; as well as providing temporary respite from street life. He attended Columbia High School. Future voices his praise of Wade’s musical influence and instruction, calling him the “mastermind” behind his sound. He soon came under the wing of Atlanta rapper Rocko, who signed Future to his label, A1 Recordings. Since then his work ethic has driven him to his success.

Wilburn currently has six children with six different women: Jessica Smith, Brittni Mealy, India J, singer Ciara, Joie Chavis, and an unidentified woman. He was engaged to Ciara in October 2013. Their son, Future Zahir Wilburn, was born on May 19, 2014. Ciara ended the engagement in August 2014 due to his infidelity. His fifth child, Hendrix, was born on Christmas in 2018.

As of 2016, Wilburn is being sued by both Jessica Smith and Ciara. Smith is suing him for failing to pay child support, and stated that their son “suffers from emotional and behavioral issues stemming from Future’s neglect as a father”. Ciara is suing him for defamation, slander, and libel. In October 2016, a judge said that Future’s string of tweets bashing Ciara did not relate to the $15 million she was asking for.

Prior to his music career in 2004, Wilburn was arrested for theft by receiving stolen property and contempt of court.

Nigeria That Is Yet To Eradicate Lassa Fever Is Not Prepared...

Nick Canon Says He And Mariah Carey Can Get Back Together