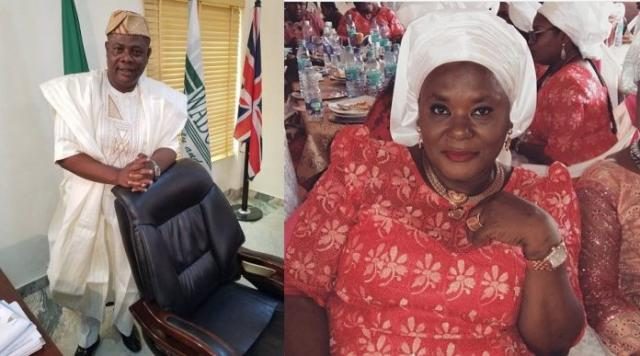 Adenike Quadri, the pretty wife of veteran Nollywood actor, Alhaji Yinka Quadri has come out to speak about her husband who she has four kids and grandchildren with.

As a Muslim and a popular actor with the ladies always hanging around him, several people expected Yinka Quadri to have more than one wife.

Shockingly, though, he is still with his one wife, his marriage is still strong, and his wife has been singing his praises.

His words in a recent interview, “I am with one wife; we have been together since 1985. But before we got married, I already had a child from someone else. I had a normal wedding ceremony with the woman, but along the line, we discovered we were not compatible. We would stay together in a week, that makes 7 days, we would fight for 5 days and just be friends for 2 days, so we were not compatible and we did that for 5 to 6 years, so our parents decided it was better we went our separate ways. And after she left, I met my wife, Nike in 1985 and we started having kids in 1989 and she is the only woman in my house.”

Speaking about her hubby recently, Nike Quadri also said, “Alliamdulilai, I thank God that I met Yinka Quadri in my journey of life. Like I said, he’s a great man. He was the one who introduced the Islamic religion to me. He made me a Muslim. I was born in a Christian home, but I’ve never had any regret ever since I became a Muslim. If I should rate my husband, I will give him 99%. He doesn’t fight or get angry. I’ve known him for the past 30years, but he has never changed a bit. We have never kept malice for a minute. I understand him to a large extent, which is why I’m reaping the fruit of my good labour in his house today. I’m enjoying the patience and understanding I used in co-operating with him and running the family.”

“When I finished my school certificate programme in 1983, I went to a catering school for a diploma for 2 years. After my diploma course, I met Yinka Quadri. The first day we met was the same day he said he was going to marry me, but I told him to let us leave everything for God. That God would put us through. Lo and behold! We started the relationship but I never planned to marry him. My plan was just for us to enjoy the friendship and move on. But one thing I will forever appreciate God for is that I made the right choice and agreed to marry him, because I’ve never for one day, regretted our union. I used to tell a late sister of mine that if it’s possible for one to come back to this world again and marry, I will still marry Yinka because he’s a very caring man. He takes care of me, the children and every other responsibility. I owe everything I’ve achieved in this life to God and to him. His nature of job is very powerful, a worldly job for that matter, but we understand each other. I make sure that I love what he loves. He’s a man loved by many and he also loves people around him.”

“Yes, I met him on the job. I really thank God who created me because any woman who wants the progress of her husband, especially those who know the nature of her husband’s work must learn to overlook so many things. I respect my husband a lot and I always overlook so many things because I love his work. I do pray for him every day; even if I go to any prayer session, I always make sure that I give money to Alfas for special prayers for him, that people must love him, that his star will not suddenly fade away.”

“My husband and I are from the same town. My father was very popular and very wealthy when he was alive, the same thing with my father in law. The two families knew each other very well. So, it was so easy for my father-in-law to succumb and support our union 100% irrespective of our religious differences because he knows my father’s pedigree. Moreover, my family doesn’t discriminate. Though my father was already late then but my mother played a big role in our relationship. She was one of the people who chose my husband for me. She was very happy with my husband and accepted him wholeheartedly. Alhamdulillah, we have been very good friends since then. Like I said, my husband and I never fought for 1minute. You know it’s not easy to keep a woman or live with a woman without misunderstandings, but any moment I want to get angry and my countenance changes my husband knows how to calm me down. Ever since I got married to him, nobody, not even my family has ever interfered in the affairs of my home, and I’m enjoying it and I will enjoy it for the rest of my life.”

“Alliamdulilai, I thank God for everything. I’m an easy-going person. Everybody knows me through God and my husband. At times, I do show people that I’m Yinka Quadri’s wife. People also love to associate with me. I do smile when I’m being recognised as his wife. I was a petty trader, but it was Yinka who made me popular, and I became an international woman. I gave birth to my last born overseas and my children are there as we speak. I pray to God to always protect my husband for me. I will also like to advise every woman out there especially celebrities’ wives, patience and endurance are the keywords. Let us learn how to overlook some things in order to keep our home. We need no one to tell us that the work of our husbands exposes them to so many things, so we need wisdom to keep our home.”

Hope Uzodinma’s Supreme Court Victory Is The Will Of God –...

Loss To England Was Unnecessary And Stupid – Khedira