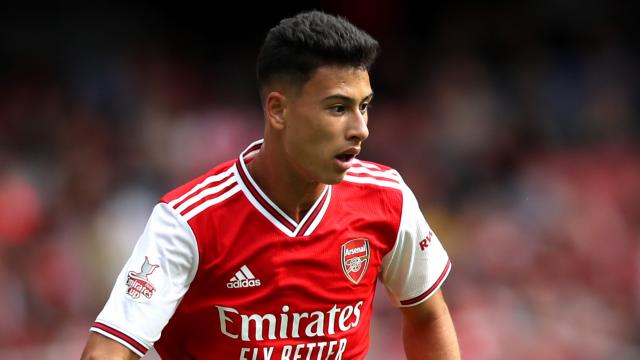 Arsenal manager, Mikel Arteta has said Gabriel Martinelli needs to ignore praise for his amazing form and focus on developing as a player.

The youngster has dazzled since he joined from Ituano in the summer, netting 10 goals in 21 games and dazzling in the 2-2 Premier League draw at Chelsea.

The manager is aware of how talented the Brazilian has been at the Emirates Stadium but he wants him to concentrate for the long term, not for short periods.

He added that he definitely has the potential to be great at the club.

His words, “I would like to talk about potential, more than what it is at the moment because for him there is still a long way,”

“The stature of this club, to give him the key to do that straight away is not fair on him. We have to bring him down.

“I want him to train with his head down every day hard and slowly he will start to earn the praise if he does what he needs to do every day, but it is not about one or two days.”

“I heard a lot of things about Gabi before I joined and the moment I saw [him] in training, it was confirmed the things I was told before,”

“I think the way he competes and how brave he is in every decision on that pitch is very unusual for an 18-year-old.

“He competed against one of the best defenders in the league, in [Cesar] Azpilicueta, and he got at him every time he had a chance. His fighting spirit is incredible and then he is a threat for goal every time.”

READ  My Fit Players Have To Give Everything They Have - Mourinho

“That is the risk and not just him, but all of us and me included and the club and the people around him,”

“We have to support him and protect him. We cannot just give him the license to think he can do that every single day and he needs to do that and put himself under that pressure when he can maybe get blocked a little bit.

“It is completely the opposite. He needs to play with that freedom where he has the license to do what he wants to do on the pitch, but with the pressure really that it doesn’t always have to be him to do it.”