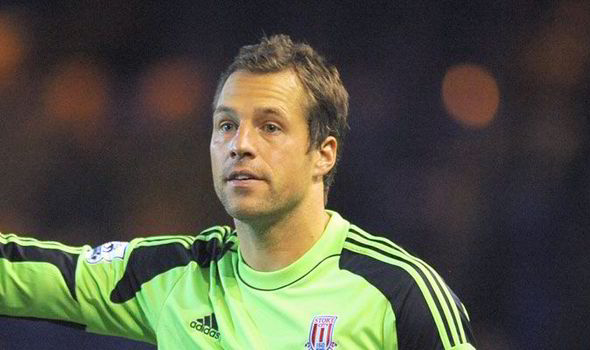 Ex Sunderland goalkeeper, Thomas Sorensen has come out to say that he had a successful trial for Manchester United before joining Sunderland.

Thomas recently revealed that he had a great experience at Old Trafford but it was Sunderland that snapped up becauase they loved signing Danish players.

According to him, signing for Sunderland was not easy because he did not know much about the club at the time, but he eventually fell in love with the passion for football displayed there.

He added when he signed for the Sunderland, Denmark, his country was focusing on teams like Tottenham, Liverpool, Manchester United.

His words, “In 1997, in December, Peter Schmeichel had organised for me to go for a week’s training with Manchester United,”

“I had a great experience and then they invited me back in February.”

On Sunday, “During that summer when I joined Sunderland I actually held talks with Ajax Amsterdam and there were a few Danish players at Udinese in Italy,”

“They had a good eye for Danish players so I actually had a meeting with them in Copenhagen.

“I was playing for Svendborg in what would be the Championship, the Danish second division, and Tony Coton came across twice.

“I didn’t think much of it because, especially the first game, we were playing in more or less a field with some barriers around it. A typical non-league stadium with maybe about 100 people watching.

“I thought: ‘We’ve got people from England watching this. Surely they can’t be too impressed?’

“The season came to an end and my agent mentioned Sunderland and, to be fair, I hadn’t really kept an eye on what was going on in Sunderland.

READ  Mariappa Is Proof That Coronavirus Affects Everyone Differently - Pearson

“I knew they had been in the Premier League but in Denmark the main focus is on Tottenham, Liverpool, Manchester United and all the big teams.

“They just said: ‘Go and have a look at it and maybe you will like it, maybe you won’t’.

“I met Peter Reid and after half a day I knew that was where I wanted to be. I loved the passion and they actually showed me the semi-final against Sheffield United to show me the atmosphere.

“That half a day sold it to me. I wanted to be given a chance and it wasn’t the Premier League so it wasn’t an impossible step.

“Peter Reid was willing to give me a shot and that was all I wanted. I wanted a chance to cement myself and it was really a no-brainer.”

M’Villa Joins Sunderland On A Season-Long Loan From Rubin Kazan |...