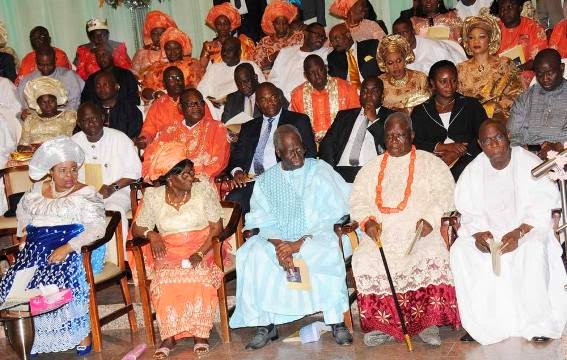 The president’s daughter, Faith, and her heartthrob, Godswill Osim Edward, a Prince from Cross River State, exchanged marital vows at a colourful church service which held at the National Ecumenical Centre, Abuja, while the reception took place at the International Conference Centre.

Obasanjo and Amaechi, who both arrived separately, stole the show briefly as they got a loud ovation from the congregation with the president smiling when their names were mentioned among dignitaries at the church wedding.

Dressed in a white flowing agbada, Obasanjo arrived at the venue of the church wedding about 11:15am just as the sermon by Pastor E.A Adeboye was being concluded, while Amaechi, who had been there earlier, left at 10:30 am before the conclusion of the wedding ceremony.

The former president was given a front-row seat beside Ijaw national leader, Chief Edwin Clark, who was flanked by the Peoples Democratic Party, PDP, Board of Trustees Chairman, Chief Tony Anenih.

He exchanged pleasantries briefly with Clark before keeping a straight face throughout the service.

Information Nigeria reports that there has been a no-love lost relationship between President Jonathan and the duo of Obasanjo and Amaechi.

While the issue between Jonathan and his predecessor stems from the former’s perceived ambition to seek a second term in office, contrary to a purported verbal agreement he had with Obasanjo, his problem with Amaechi could be traced to the reported handing over of oil wells belonging to Rivers to Bayelsa.

Ryan Giggs Would Be Worth £2 Billion Now – Roy Keane

What Is Wrong With Atletico Madrid’s Defence?