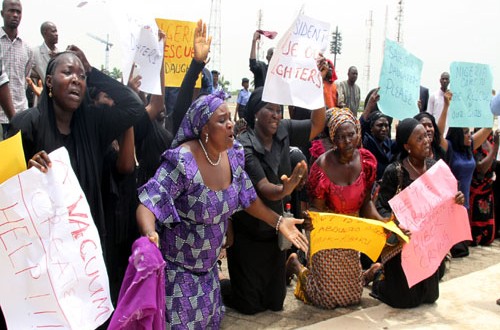 The ruling Peoples Democratic Party, PDP, has called on the authorities of the Government Girls Secondary School, Chibok, Borno State, to release the names and pictures of the female students abducted by Boko Haram gunmen from their dormitories on April 14, 2014.

Former Aviation Minister and PDP National Women Leader, Dr. Kema Chikwe, made the call while leading a PDP Women’s prayer session for the unity of the country in Abuja on Monday.

The ex-minister pointed out that the issue of the kidnapped girls had raised a number of questions which nobody has been able to provide answers.

According to Mrs. Chikwe, the abduction of the schoolgirls had left the hearts of the womenfolk not only broken but also bleeding.

She said women would continue to intensify prayers for an end to the Boko Haram scourge, terrorism, insurgency and kidnapping in the country.

“We need a peaceful and united Nigeria. We as women of Nigeria, as mothers will intensify our prayers for the end of Boko Haram, end of kidnapping, release of the Chibok girls, end of terrorism and insurgency in some states in Nigeria

“Let the truth be told with God’s intervention. Our hearts are bleeding, not just broken. Please God send the Chibok girls home to their mothers and families,

“We plead with the school authorities to release their names and their pictures. Let God touch the hearts of those who know and have perpetrated this heinous action”, she said

The PDP Women leader also decried the recurrence of corruption, armed robbery and other violent crimes in the country.

She condemned what she described as “hypocrisy about corruption among Individual Nigerians”.

She stressed that the kidnaping of the Chibok girls was the worst of the crimes in recent time.

“There are many questions to be asked and more to be answered. How did it happen? Who is behind this? Who are those behind this? Those behind these crimes love darkness rather than light, because their deeds are evil”, she said

I Am Not Running From EFCC – Obanikoro